The 1980s might be on their way out. Other than M83 (who probably had the best year of his career with last year’s double-album Hurry Up, We’re Dreaming), Chromeo, and a handful of others, “sounding 80s” is no longer the stamp of approval it was when the Bravery, for example, put out “An Honest Mistake.” The 80s-ness of the Killers’ new “Runaways” seems to stand out mostly because of how expensive it sounds. There is one important point to be made, though, about the success of M83, A-Trak, and Mark Foster: If done right, sometimes the 80s aren’t a bad thing.

Virginia’s post-punk/neo-wave offering, Eternal Summers, seem to have taken that point to heart. Hell, they wear it on their sleeves, shout it out while blasting Peter Gabriel outside windows, and have it written in magic marker on their Trapper Keepers. And they revel in it with such joy that it’s infectious. The 80s and early 90s joy was apparent at their July 26th album release show at Mercury Lounge. Blazing through an hour-long set, the band showcased just about the entirety of their second full-length, Correct Behavior, including a few songs not on the album.

If anything, the live show was the perfect piece of promotion for the album itself, largely due to the fact that the album’s pristine production was sorely lacking coming from a mixer that probably did its best. The production on Correct Behavior goes a long way in selling the songs, and you need that to fully appreciate what Eternal Summers is doing here.

The other big factor in what sells the band was there in spades, and that factor is singer/guitarist Nicole Yun’s passion and honesty. On songs like “You Kill,” “Millions,” and “Wonder,” she maintains an innocence and earnestness all while delivering catchy-as-hell hooks on both vocals and guitar, a guitar that’s drenched in effects like a Christina Billotte*-led Modern English covered in cotton candy. Bassist Jonathan Woods and drummer Daniel Cundiff (who takes lead vocal duties on “Girls in the City,” doing his best spoken-word Bono) both do a solid job of backing her up.

A lot of what makes Eternal Summers work is their tightness as a 3-piece. The setup lets them reach some moments of intimacy and playfulness, both live and on the recordings. The challenge they face, though, is the limitations of the genre. Yes, a lot of it sounds exactly like a lot of what you’ve already heard. The band proudly wears their ‘80s and early ‘90s influences, but it enhances their sound, rather than making them a pale imitation of a thousand other bands. It’s not TV On The Radiohead, but it’s a celebration of everything that came during Videodrome. It’s familiar, and sometimes that’s enough, right?

*Christina Billotte was the singer/guitarist from ‘90s all-girl alt. rock band Slant 6. There, now you don’t have to look it up on Wikipedia. You’re welcome. 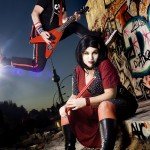