I love it when I come across a band who has great music that also understands that they have to work hard to get known and are willing to invest both time and money in the band to achieve thier goals.

Let Indie Band Guru introduce you to Last Nights Vice, a phenomenal rock band from St. Louis, Missouri.  They have both the talent and sheer determination to make it.  Thier stage show demands attention and seems to gather them more fans with each show.

Where Last Nights Vice really stand out though is in thier promotion efforts.  The band even has a mascot.   Speakerhead is a big box they made with a working speaker that they wear on thier heads and play thier iPods out of.  LNV uses Speakerhead at both local and national shows blasting thier music for all to hear.

Last Nights Vice also has been promoting thier new album ‘Perfect Little Noise’ with promo videos they made with the help of some movie maker friends.  Another reason why networking is so important.  Check out the videos HERE.

The band also orders glossy, full colored flyers to promote shows and the release of the new CD.  The flyers also include download codes that can be redeemed on thier website for a free track.  When I asked them how they afford it all they said “Mostly we pay for them with money we make from shows and merch sales.  We decided years ago that we would be in the red for a long time.  We definitely pump a lot more money in that we get out.  It is actually cheaper to do a 5000 bulk run of glossy flyers though.  At about $0.03 a piece, as opposed to black and white paper flyers from Kinko’s that cost about $0.07 a piece.”

The bottom line is, Last Nights Vice is willing to do whatever it takes to get thier music out there to the masses.  Hard work pays off.  Nad it helps that the music is damn good.  Check them out for yourself at www.lastnightsvice.com

Get Yourself On YouTube. Lil Daggers Show You How. Previous
Back To Work At Indie Band Guru Next 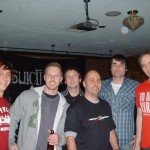