In the past two decades – even before the time of John Mayer’s debut – there has been a slew of indie rock coming out of Atlanta, GA. In recent years especially, the genre of “indie” music has gotten a huge boost of talent from the Peach state. The city has most recently produced bands like Jackyl, Kaki King, and indie darlings Deerhunter (hipsterdom has indeed been on the rise in the South, largely due to the indispensable indie mecca SXSW). So we welcome the latest addition to Atlanta’s indie music scene, Future Self.

Future Self is one hungry band

Don’t let the name fool you. Future Self isn’t a ‘80s-inspired, post- (or Neo- ) New Wave band, although there is a good (but subtle) amount of synths and shoegaze on display. The music is firmly rooted in classic songwriting styles, such as Billy Joel, Nick Drake, and even a little bit of Captain Beefheart. Appropriately enough, Nick Drake and Randy Newman are high on Future Self’s  Top 20 friends on Myspace.

To this mix of ‘60s and ‘70s singer-songwriter heart-and-soul, the band brings electric guitars, a bit of musical theater, and most distinctly, a very ‘00s approach to the beats and rhythms that update the classic pop genre for the twenty-first century (a little bit like putting Barry Manilow in skinny jeans and converses, and sticking a Blue Moon in his hand). The band even claims to have a certain bit of bluegrass in their music that can also easily be called Americana.

Future Self, co-founded in 2008 by singer-pianist Will Mitchell, showcases their music in a 6-song debut LP Debt to a Muse. The result is a dreamy collection of feverishly gentle romantic yearnings that has all the aforementioned influences injected with healthy amounts of Death Cab for Cutie. The Ben Gibbard in Mitchell’s vocals is most apparent in the Pink Floyd-flavored “A Certain Fool.” It’s a world-weary Ben Gibbard that he channels here (and a little bit of  Brandon Flowers in the Killers’ “Read My Mind”) singing a story of a love that’ll probably go unrequited. It’s also a decent entry into the stalker-rock genre popularized by the Police’s “Roxanne.” Watch out for this song though – the “La-da-dee-da” part is infectious.

The disc opener “Admit” has a little bit of Peter Schilling’s “Major Tom” in the verse that betrays the loneliness in Mitchell’s voice. Which brings to mind Mitchell’s voice: he is indeed a competent singer (the entire band seems to be doubling almost every line, which is interesting at the best of times but eventually gets grating), but the question isn’t “Is his singing good?” as much as it is “Will his performance here stop the object of his affection from leaving?” It might, but it will definitely buy him time (at the very least a lunch on a beautiful fall afternoon).

Mitchell’s voice falters a bit in the exciting bluegrass (but what I call Americana) tribute “Wasn’t Your Fault,” but the song lets lead guitarist Shim Gartner shine whereas in other songs he’s buried in the mix. The shoegaze-y hipster waltz of “Looked for You” similarly betrays Mitchell’s shortcomings (only in the chorus), but also gives his lyrics a chance to take center stage: playful in character, but also gently biting when they have to be. There’s honesty when he says he “looked for you…like an original sound.”

“Some Things” – along with “Admit” – is a decent piece of chugging piano-rock that showcases what drummer Jason Pearlman brings to the band: a little bit of Ringo and the Dresden Dolls’ Brian Viglione, but a lot of Nathan Followill from Kings of Leon. It works well, giving the songs the thunder that nudge them closer to the swelling fever-pitch that the band seems to strive for but never quite reaches.

“Hung Up On You” is the album’s Beatles song, where Mitchell and the rest of the band work on “Fixin’ a Hole” in his love life.

The production is competent, with the impressive mixing of Mitchell’s voice in with the rest of the band, but the focus on Ben Williams’ bass – and the low end overall –  leaves much to be desired.

While in Georgia some years ago, I remember driving past woods (that I later camped in), watching the sun come up on nondescript highways, and then arriving at the green fields of Emory University. Future Self’s debut brings to mind a feeling of the calm and serenity I felt that morning, similar to cracking open a bottle of pinot grigio or pinot noir and leaning back in your favorite lawn chair as you watch the sun set. What Debt to a Muse doesn’t do is reach the swelling energy that the music calls for. As gorgeous as it is, the music constantly simmers and shivers, but never explodes. Mitchell and co. long for love, but they don’t yearn hard enough to win the girl. It’s difficult to see how the material would transfer live, or even if you would want it to. So until Future Self can turn up the fire underneath their pot of emotion, they are best experienced next to a slow-burning campfire as you hold hands and reconcile with the one you love. Who knows? Maybe the band can help you patch things up and give you and your loved one a chance at a brilliant future…Future Self, that is!

Find out more and hear them for yourself at: 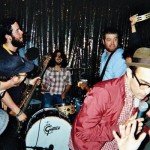 Lil Daggers Coming to NYC - Be There! Previous
Has Zooey Deschanel Convinced You That She Can Sing Yet? Next