Artist To Watch In 2020, May Edition: Dale Benedict 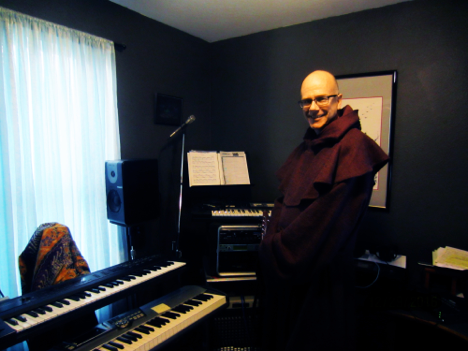 Why, you get Gregorian Rock, of course!

Okay, obviously that’s not much of a riddle, but the truth is I couldn’t think of a more clever opening line so that’s all I got. Lol.

Anyhow, Gregorian Rock just so happens to be the brainchild of one Mr. Roland Dale Benedict, and he’s our featured artist for this month of May, 2020.

Born in North Canton, OH, Dale (as he prefers to be called) lived in several U.S. cities over the course of his life, including Nashville, where I currently live :). He spent most of his childhood in Seattle, WA, and he fondly recalls the evergreen forests and mountain ranges there. He and his wife of 23 years, Carla, and their two children ultimately settled in San Antonio, TX back in 2011.

Musically, Dale’s primary axe is keyboards (his first name is Roland. Of course it is.). Interestingly, he was forced into piano lessons at age 9, but didn’t realize he actually liked to play until after the lessons stopped, approximately 6 years later. He also plays something called the Chapman Stick:

In addition, he also plays the EWI (pronounced ee-wee), or “electronic wind instrument” which you play like a clarinet:

Dale is a graduate of the University of North Texas, which has one of the best music programs in the entire world.

It was during his college years, actually, that Dale had his defining musical moment: “The first band I was in was a country band in North Carolina. I rehearsed with them during the summer after my freshman year of college where I was majoring in biology. I didn’t know country music, and didn’t really like country music. But we performed every night for a week before I went back to school. At the end of that week, the drummer came out to the house and gave me $100. I was just having fun, and they PAID me for it! The clouds parted, the angels sang. My mind raced forward with the idea of getting paid to play music I liked, or better yet, music I wrote!”

I know that feeling, for sure!

Dale’s main music influences are the band Yes (with Rick Wakeman on keyboards), Emerson, Lake and Palmer (Keith Emerson, keyboards) and a series of recordings from the 1970s called Switched On Bach. These are recordings of the music of J.S. Bach played on synthesizers.

So there’s where the marriage of classical and rock began for Dale. As for the evolution of “Gregorian Rock” read on:

As for his current musical career, Dale released his first album in 2013 and so far has 4 albums out. He’s currently working on the fifth, but as of this writing a release date has not been set.

The “Gregorian” moniker refers to a type of music called Gregorian Chant, which came about beginning in the 9th century. The main characteristic of this type of music is that it’s vocal melody only (no harmony, no instruments) and is/was used to sing liturgical texts during church services. Nowadays, Gregorian chant falls under the category of “classical” or “art” music.

While Dale is not the first person to combine elements of classical music with rock (think Trans-Siberian Orchestra, the aforementioned ELP, et. al.), his pairing of chant and rock might be the most unique. As he, himself describes it, “Gregorian Rock combines ancient with modern to create a serene, yet pummeling sound.”

This becomes plainly obvious when you listen to the opening song “Consuming Fire” from his 2017 album entitled Fire.

Good luck falling asleep to this kind of music.

Anyway, so how did this “Gregorian Rock” thing come about, exactly?

“Over the span of years, I played in bands, I played in a duet, I played solo. The attempt was made at writing pop/rock, then worship music. ALL of the endeavors were struggles, and all of them fizzled. I quit music for several years. One day, inspired by the band Iona and the way they merge Celtic with prog, I tried to think of what were some things I could combine that would produce a unique output? Gregorian chant-style vocals, with modern instrumentation was what I decided.

“I wrote the first GR song (Sanctus) and posted it on a Christian songwriter forum, and waited for feedback. A few people had constructive criticism, so I re-recorded the song using some of those ideas, re-posted, and again waited for feedback. I think a month passed with nothing, so I started to think I needed to come up with something else. It was very discouraging. However, within 24hrs of planning to abandon the idea, two people posted (from opposite sides of the planet) how much they liked what I had done and how I really needed to pursue this.”

I’m glad he pursued this. His music is awesome, if I do say so myself!

“Those early musical efforts were all fraught with conflict and unhappiness.” – Dale Benedict

Dale said something else that really stood out to me: “Those early musical efforts were all fraught with conflict and unhappiness. Whereas Gregorian Rock was propelled in a way that no other music project had been. And it continues to this day. Each album is better than the last. I got Grammy-nominated guitarist, Phil Keaggy to play on my 3rd & 4th albums, “Fire” and “Christmas”. Tony Levin (famous bassist for Peter Gabriel, King Crimson, & a host of others) plays bass on two songs on my next album.”

He also recalls a funny moment involving himself as a concert attendee:

“Years ago, my wife & I and another couple went to a Dallas Symphony performance. Before it started, I made an offhand remark about how nobody should make any rude noises during the show. Later, when the orchestra was playing a particularly loud section, they suddenly hit a very quiet passage (pianissimo), at the same time, someone in the audience (not one of us) blew his nose with a tremendous HONK. I looked at my friends and said “Oh dear.” All four of us lost it. While the music was loud we could laugh, but every time it got quiet, we had to stifle it. This created a dynamic in which we couldn’t stop laughing. Because when you’re not supposed to laugh, and you want to, it makes it 10x more difficult to stop. We were wheezing and snorting and trying to act like maybe someone else was making those noises – for the entirety of the remaining performance.”

I asked Dale for some final words of wisdom, and he shared with me the following: “Nobody has a formula for how to make this indie-music-thing work. If anyone says they have one, it might work for some people, but they never tell you about all the musicians for whom their expensive plan DIDN’T work.”

He also encourages folks to “support indie musicians by going to their shows, buying their music and their merch. Streaming is nice, but it won’t pay the bills.”

Here’s where you can connect with Dale: 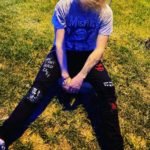 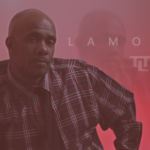