It’s hard to believe it’s been three years since Climbing Trees released new music. Not only that but five years since their superb album Borders. Where has the time gone? The band’s frontman Matthew Frederick explains their absence, “We decided to take a year off in 2018 to spend a little time on our various solo and side projects. Before we knew it, two years had passed, then three, and a whole lot has happened in the world in that time. We didn’t want to come back until we had something to say, and, more importantly, a good song to say it with, and Troubling Times certainly feels timely in that sense. We’ve really enjoyed making music as Climbing Trees again, and we can’t wait to get back out on stage in front of the Trees fans, whenever that may be”.

Now the guys are back with their new single, “Troubling Times.” For this one, it was the collective effort of Matthew Frederick (Vocals, Piano, Electric Guitar, Percussion, Backing Vocals), Colenso Jones (Electric Guitar, Acoustic Guitar, Backing Vocals) and Jack Beddis (Drums). You can hear this combination at work as soon as you press play. Together they create a soft alt-rock vibe that flows effortlessly during its intro.

Soon, Frederick starts their tale with, “In the troubling times / There’s no space for the man in the middle / From the withering highs / It’s hard to see the ones below.” As always, Climbing Trees talents shine with their lyrics. They offer both depth and imagery with their words. With this song, they paint various scenes with a range of emotion. Of them all, the lines which stand out the most are “When the end is in sight / Moving through the darkest tunnels / Now you put up a fight / You will see how far you go.”

As much as the lyrics stand out, its soundtrack is equally as impressive. Its atmospheric vibe adds extra depth to the story, even more as the song reaches the second verse. The use of strings increases its captivating nature. It seem to amplify everything which makes “Troubling Times” a delight to hear. A wonderful arrangement created by Frederick’s but delivered by the talented David Grubb Quartet.

As the song comes to a close, the music and its arrangement impress even more. There is something special about the strings and how they interweave with the repeated line “In the troubling times”. The tone of the delivery with the combination of these instruments creates something beautiful. It is the perfect way to close a great track.

“Troubling Times” is a stunning reminder of the musical talents of Climbing Trees. Thankfully, they are planning to get back out on the road (when they are permitted). Also, they are working towards a new album. The latter is a challenge as the members are busy working on solo/side projects. Hopefully, the planets align soon. But, no matter the wait, as the latest single shows, it will be worth it. 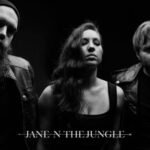 Title Holder is ‘Going Insane’ with their new single