An old adage of advice to young authors is “write about what you know.” Whether or not this works for everyone, the premise stems from the goal of being authentic. In the music scene, this remains a worthy target as well.  Throughout history, we’ve all heard the background noise of musicians and bands eventually clanging into the bottoms of waste-baskets because they reeked of contrivance and “posing” (Examples: We like the Beatles, but the Monkees are fairly useless – even though there was one period  when the latter actually out-sold the former. We love Dylan, but The Weavers (?) well… and then there’s Spinal Tap). Fortunately, every now and then music artists land with two feet squarely on both authenticity as well as well as talent.

Dustin Smith and the Sunday Silos seem to have the framework in place to be one of those bands. Smith’s Southern Iowa roots are both explicitly and intangibly evidenced in his artistry. By his own admission, he “grew up in the humble heart of Iowa (and his) musical interests have always been satisfied and influenced by the early Western Swing and Americana that was played throughout (his) home as a child.”  Although specific songwriters could be noted here as probable  influences, I didn’t personally think about the “fruit” of the Mid-west’s artistic “roots” until living roughly six years in the Southern Iowa (near Des Moines) region. Though I still can’t claim to have a perfect grasp on this vibe, I can attest there is a particular, though still nearly inexplicable, “feel” to both Iowa and its artistic community. I like to compare it to the weather. In juxtaposition to the southern and western regions of our country, Iowa can be markedly… cold. Still, in contrast to these other locales, an average day can be extremely cold … yet very sunny – even beautifully sunny. I see this as an apt metaphor for Smith and the Silos’ music.

Their appropriately titled December 2012 release Northerner is certainly anything but sunny “sugar cane.” Both the tone and the lyrics reflect loss, heartache, and even an occasional bitterness (note one of my favorite tracks ‘Rosemary’, and the line “go away misery, thanks for nothing, Rosemary”). Still, like the brightness of the sun and the generally optimistic spirit of Southern Iowa, this album won’t bury you in a nihilistic deep-freeze. Northerner is pensive without being depressive. The arrangements can be bitingly sparse (banjo, bass and percussion), and yet replete with alluring brass. Smith’s voice has a definite knife-edge quality, but it won’t hurt you. The sound is quite warm and friendly – like an old friend, and yet you have no idea why since you can’t pigeon-hole it. As I attempt to jump out feebly into some modern-day reference-points, try to imagine a subtle blend of Van Morrison, Jamie Cullum, Mumford and Sons, and Sufjan Stevens. Although very different from any of these, I’m confident fans of these artists will likely love soaking in the season with Smith and his landscape of Silos. It’s an acquired, tasteful balance you’ll learn to love. Like Des Moines, it’s familiar but fresh. It’s cold… yet at the same time… sunny. 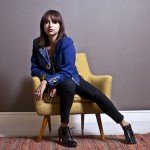