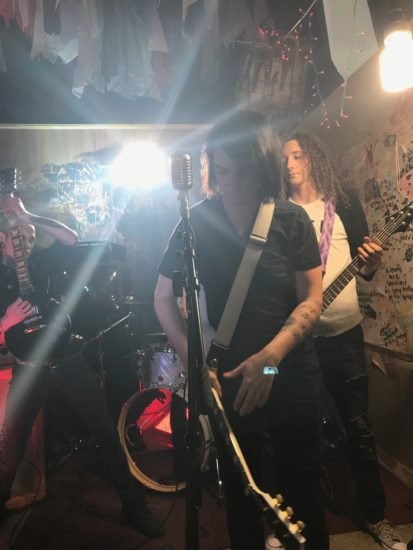 If you’ve ever participated in an escape room, you’ll know the feeling in Ex-Okay’s video for “Locked.” The thought that you’re trapped being timed to find your way out, while it’s not for everyone some people get thrills from it. While that isn’t me, watching it play out in “Locked” gave me enough thrill for the week.

The video starts with a woman sitting down in front of a future-esque screen that appears to be attached to a camera hidden in the rooms featured throughout the video. It makes it feel like the beginning of a Black Mirror episode where you’re about to spend the next 3-ish minutes decoding everything that’s happening.

The blurry room camera fades in on a man who ends up being trapped in a room. He has to work quickly to find his way into the next and the one after that giving it an escape room meets Black Mirror feel. You are taken through his frantic actions between cuts of the members of Ex-Okay rocking out in another dimly lit room.

The track begins just as powerful as it ends. With crisp chords that ring with your throughout the entire duration, heavy drum beats, and vocals that match the best of hardcore rock out there at the moment. Hidden in the layers of the track are enough twist and turns with dynamics and instrumentation that keep your ear alert and wanting to continue listening. Keeping the production on the grittier side, it shows the bands true unique sound and how they’re individualizing themselves from a scene that can blend together.

Ex-Okay are getting ready to release their album Awkward Silence and are showing their direction perfectly with “Locked”. Able to maintain an edge and a sound all their own, fans can expect a ton of energy and power behind the sound across the entire album.

As they’re preparing for the release of their upcoming album Awkward Silence, Ex-Okay have released a new music video for “Locked” and are ready to hit the road again.

Forming way back in 2009, the group has worked long and hard to put together music that shows off their talents and original sounds.

How did you come up with the name Ex-Okay?

How did the concept for the “Locked” music video come about?

The locked concept came from Grow Vision. Robin the director came up with the story

How does a song develop from start to finish for you guys?

We recorded the songs and went over guitars and bass and synths as well as violin, viola or cello and piano and 808s. After that processes, we write the lyrics and rehearse the emotion we want through the songs. For final mixes, we went into N.R.G studio and had multiple compressors and an SSL mixer.

Was this the process of writing your upcoming album Awkward Silence?

Yes, this is the processes for our latest album Awkward Silence.

What can listeners expect from Awkward Silence?

A unique sound that has a lot of energy and power behind the songs. As well as the songs, are not basic 180 bpm some songs change the rhythm and timing and has it’s own feel too it.

What artists have influenced the Ex-Okay sound the most?

After we release our record we are planning on touring. 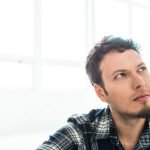