“Get Me A Drink” – Inspiration Comes At Any Time

Musical inspiration can strike at any moment for an open minded artist.  Even while your time is being “stolen” by other things in living your daily life be ready to accept an idea and turn it into song.  Our latest find A&L seems to have done just that.

The duo is made up of two seasoned music industry professionals who have come together to share in ideas.  Anthony Casuccio is a 20 year veteran whose production work has been nominated for 3 Grammy Awards.  Lana Marie is an award winning vocalist on the East Coast whose voice has been featured on many radio and television jingles.

One day while Casuccio was stuck in an overly long meeting he had the urge for a nice adult beverage.  The song “Get Me A Drink” was written before the meeting even ended.  He brought in Lana who belts out the vocals with an energetic roar demanding that everyone listening get up and party.  The melody will stick in your head and be humming inside there way after the 3 minute song is over.  Take a listen here: 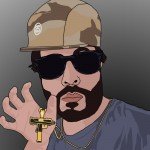