My head still swimming from the amazing news I’d just received hours before (I’ll be receiving my second scientific publication in less than two years), I surprised myself by exiting on the west side of the square instead of the east; it must have been muscle memory. Worming my way through the throngs of characters that frequent this neighborhood, I stumbled upon a volleyball circle comprised of businessmen in suits, dreadlock sporting teenagers, and seamless delivery people. As I walked by, someone passed the ball directly to my face, and I barely deflected it in time to notice the look of horror on the wall street-esque person’s face who had hit it turn into a cheer for the save. Out of a desire for not wanting to miss a second of the performance of Guided by Voices, I decided to forgo joining the circle, and continued on my way to Irving Plaza, arriving just in time to get settled before the show started.

Knowing the way to the photo pit and the regulations governing the sacred space: Ummm… I had no idea. Upon asking several security guards and personnel, I was even more confused, and had more questions than answers. The best course of action was to just go with it, and document the show until someone told me otherwise. 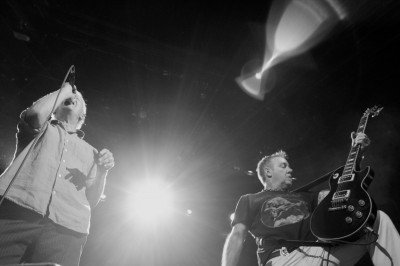 Following one guard’s directions, I arrived at the photo pit just as the first song was drawing to a close. Now, I’m no stranger to Irving Plaza, but I must say that this was the fullest I’d ever seen it, hence the battle to the front of the stage. Not only was the floor packed with GBV fans, but everyone was attempting to get as close to the front as possible, so much so that all the way to the rear bar it was belt-to-back, and all semblance of personal space melted away into sweat, cheers, and rock. After spending a good seven songs in the pit, I was escorted out by security to enjoy the show from the crowd (they informed me I was only supposed to be in there for three songs, but they let me stay longer because I was clearly having a good time. I love IP’s staff, they are the best). Having both experiences was great, because I love being in the crowd with everyone, but I also wanted to get some good shots of this legendary band. 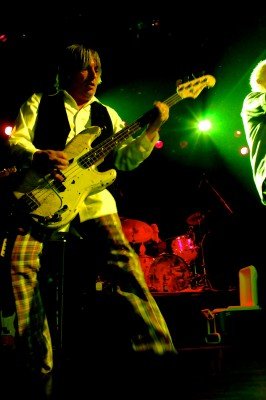 Now… to the show. I have one word to describe the show GBV put on: Unapologetic. I mean this in an excellent way. First, they have been around for so long they could focus just as much on playing for the crowd as the music itself. They gave exactly zero #^%*$ that night. Their songs were plenty of slow moving jams with energy like a jackhammer. The entire crowd will have felt it the next day, be it in their legs, necks, or eardrums. This five-piece band featured singer/front man Robert Pollard, with the current lineup comprised of two guitars, a bass, and a nice 9+ pieces kit o’ drums. On the jackhammer topic, they blew an amp on their second song, and gave credence to the phrase “less talk, more rock” by filling the void during the repair with a bass solo, and a bass/vocal jam that they’d never played before. Why would they do that, you ask? Because they are seasoned, masters of their craft, and know exactly what their fans want. 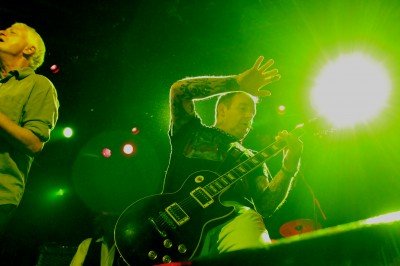 The set lasted just shy of 2 hours. They began playing most of their newest album “Cool Planet” (the second they’ve released in 2014), and then went into their other self-described “vanity” albums (so called due to being self released; their first record deal happened after their sixth album according to Robert Pollard). Even while spending less than 5 seconds between each song, they still played less than half of their entire anthology. The stage show itself was also intriguingly unique.

GBV doesn’t need fancy technology to enhance their presence on stage. Who needs a fog machine when your guitarist and bassist smoke non-stop for two hours during the show? Who needs an effect pedal for vocals when you have a cooler full of beer onstage with you? Who needs trippy visuals when you have a bottle of Crown Royal, and an endless supply of stories that involve Ozzy Osbourne, Drew Barrymore, and Peter Wolfe? (Note: These stories were told between songs during their encore, and were quite entertaining) All in all, they did more than rock the house: They entertained. I cannot wait to see GBV again, and listen to their own eclectic mix of British punk, psychedelic rock, and garage band jams. 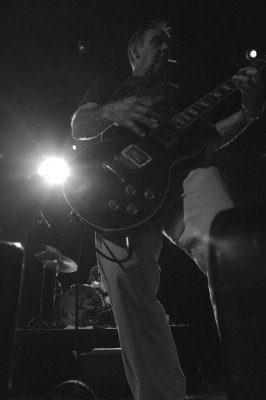 The music is good for hanging out with friends, ignoring “it’s showtime ladies and gentlemen!” while on the subway, or starting your weekend after a long, rough work week. Many songs can be slow to start, but the drums and bass add an energy you wouldn’t expect to the mild vibe.

Listen to more Guided by Voices at: http://www.gbv.com

*review and photos by Rob Ledesma of Indie Band Guru 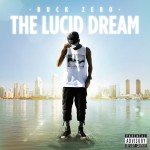 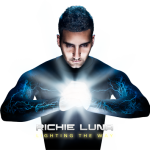