Handsome Karnivore is a rock band that originated from New Jersey in 2012. The band played many shows including the Stone Pony in the tri state area and also released their first ever record “Characteristics of Instrumental Silence” in 2013.

The release of the record brought along a following and the band was ready to move up in their career and move to Los Angeles.Along with moving to Los Angeles,a 4th member joins the band and they have got all the of their musical spirit and released their second full length album,“The Chaotic Static Between Shadow and Substance”.

By now,Handsome Karnivore has made a name for themselves in the music industry, they have gained a following and have managed to adapt to the pandemic that has affected the world. Following the events of Covid-19, Handsome Karnivore made and released their 3rd record based on the nature of the events happening, appropriately named Entities of the fog. This review will hopefully give you a good idea of what is in this incredible album.I want to give my basic rundown opinion on some of the songs included in this album and then give an overall fair opinion on the album.

The first song you hear is called “Invocation of the Entities” a perfect way to get you in the right listening mood for the musical adventure you will set on. The intro has an ambient background track and some acoustic guitar, as for lyrics, it’s a small poem that goes as follows, “In through the trees, the faceless figures wait in the breeze”.

The next one I want to talk about is “Be Careful” my personal favorite of this album, has some elements that fit together perfectly.the way the drums are played remind me of the drums in a popular Nirvana song “It Smells Like Teen Spirit”,this song has a memorable guitar riff that goes well with the organ that is played to fill the lows of the song.The song ends in a short guitar solo and organ, then an acoustic guitar along with some vocals with a reverb effect.

Another song I want to talk about is called “The Kiss from Venus”, the name alone does justice considering it’s rock,The Kiss from Venus starts with a tremolo keyboard and the main guitar and drums jump in,a sci-fi type sound plays as the guitar plays then it stops,Then it cuts to one the greatest bass lines I’ve heard in a while since “Clint Eastwood” by the Gorillaz, the bassline goes well with the lyrics and the vocals are kind of grunge style.

My overall opinion on the album is that it’s very good and totally worth a listen,Handsome Karnivore is a unique band,Entities of the Fog has a unique style of rock with a little country mixed in,I can’t guarantee it’s for everyone but I can imagine that many rock enthusiasts will like this album and more from Handsome Karnivore.

—review written by Music Kid – An independent music artist who uses a variety of phone apps to make music. 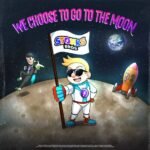