The upcoming album by Seattle progressive-pop rockers Minus The Bear is now available for a free listen here at Indie Band Guru thanks to KCRW.  The new album, OMNI, is the bands fourth album, but first with new label Dangerbird Records.  It will be officially released on May 4th, 2010.

Formed in 2001, Minus the Bear earned immediate attention with their distinctive prog-pop hybrid, featuring swirling synths and multi-layered guitar acrobatics. The band was prolific from the start and let loose with a series of EPs and albums, each drawing acclaim and a host of new fans. They embraced the road and began touring extensively, building up a dedicated fan base and discovering the powerful connection they could make when playing live.

The new album features the quirky time signatures, hyperactive riffs, and prodigious hooks characteristic of the band’s earlier work.  OMNI may be the album that helps them crossover to an even larger audience.  There are some indie-pop darlings in there.

What do you think? 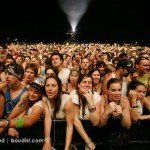