Canada’s Patiently Awaiting the Meteorite, a creative partnership between singer/songwriter Dee and production team/musicians the Grand Brothers, are turning heads and ears alike thanks to the impressive album release Canyon Diablo. The latest single from the album, “Strange Intuition”, has a more limited sonic purview than we heard with the previous single “Electrified”, but that isn’t a drawback. Instead, one of the clear intents behind this second single “Strange Intuition” is illustrating the band’s sure hand moving through the spectrum of rock music’s possibility. This is a musical unit unafraid to deal some unusual twists into traditional rock structures and the song crackles from the first with a uniquely modern urgency that complements the roots sustaining their songwriting and general sound. They are poised to soon begin their live performance careers as a unit with December concerts scheduled for Montreal and even a cursory listen to this release shows these songs boast tremendous live promise.

It’s the music that makes this tune for me. Dee’s performance and writing are top notch and I’ll write about them later, but the way the Grand Brothers take some rather hoary old rock conventions like buzzsaw guitar riffing and thunderous 4/4 drumming and dress it up in stylistically unusually settings makes this a true benchmark for what younger performers can do with rock music in 2018. Nothing here sounds outright retro – even the inevitable chorus and bridge passages seem imbued with new life as both the music and singer alike attack them with brawling, yet emotive, firepower. You stay with this song, however, from the first because the Grand Brothers clearly understand why people, still, want to hear abrasive and attitude driven rock music and know exactly how to revise it for this era.

They are well served, make no mistake, by a vocalist with pop chops who understands the same lessons nonetheless. Dee has effortless panache to burn, but he also manifests a palpable swagger at various points during the course of “Strange Intuition” and shows off one of his key strengths as Patiently Awaiting the Meteorite’s front man with his engaging vocal during the song’s chorus. Much like the music, Dee is a master of utilizing a song’s inherent dynamics without ever seeming like a performing competing with the surrounding instruments. Instead, he performs with the canniness of a true frontman rather than a vocalist struggling to make himself heard above all others. It’s a crucial facet in what makes the band’s songwriting and recordings work so well.

They have already set a high bar for themselves, but Patiently Awaiting the Meteorite sound like they are just barely scratching the surface of their respective talents and future work will likely exponentially expand their musical profile. It’s rare to hear such confidence pouring out of a band so soon out of the gate, but chemistry, that rare and ever elusive quality, has graced their collaboration with its fiery touch. “Strange Intuition”, as a follow up to “Electrified”, comes off as a masterstroke of decision making and the song will surely convince many more to give the remainder of Canyon Diablo a chance.

Find the band HERE and music on I-TUNES 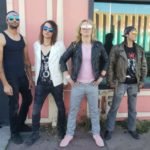 IBG Interview - 11 Questions With... Love Stallion Previous
VAN SUSANS TAKE YOU ON A TRIP TO THE 'CROSSROADS' Next 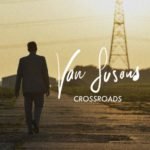