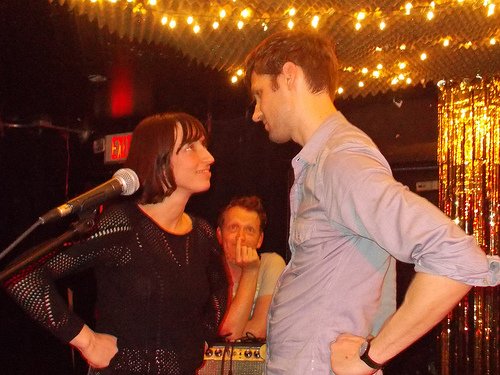 Recklesness. It can be a weakness, a handicap, a curse even. But sometimes, it can be a strength, a strategy, and the name of a damn good song, full of brilliant shoegaze-y, 12th fret attacks, and a driving melody and a beat that engulfs you in a completely realized world for less than three minutes.

“Recklessness” was part of a blazing eight-song set by the Radical Dads on Saturday, March 30th at the Cake Shop on the Lower East Side of Manhattan. The band formed in Brooklyn in 2008 during the “golden age” of Brooklyn bands (that’s when Yeasayer, MGMT, and Matt and Kim all broke or were on the verge of breaking). It’s to the Rad Dads’ credit that, even though they have that Brooklyn stamp in their (relatively) lo-fi sound coming out of singer-guitarist Lindsay Baker and guitarist Chris Dicken’s amps, they have an indisputable prettiness and undisputable joy to their music. A large part of that joy is due to the wide-eyed, unfettered beats provided by drummer-vocalist Robbie Guertin (who until last July was a member of Clap Your Hands Say Yeah, more Brooklyn indie royalty).

Add to the joy a vibrant live performance with everyone going full steam ahead. Guitarist Chris lightens up on stage, and helped make the tiny Cake Shop room the Rad Dad’s own personal main stage at Bonnaroo. Together, the Rad Dads rocked the room like a far more upbeat Sonic Youth meeting the Joy Formidable, like the Pixies with Metric’s effects, with the tiniest hint of Credence Clearwater Revival in the band’s spirit and in some of the melodies. If you were worried that the NYC indie rock scene had become passé, the Radical Dads are a breath of a fresh air that will make you…at least want to go to a show again.

The band’s new album, Rapid Reality, is out this month. Check it out at www.radicaldads.com 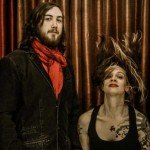 Grown Up Avenger Stuff - High Energy Alt-Rock About To... Previous
MusicTalkers.com - A Great Idea To Get Some More Exposure... Next 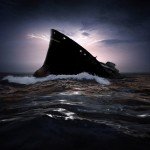