Sun Rise Above – Mellow Political Hip Hop To Get Your Attention

There are so many uses for writing music.  Sometimes it is just to have fun and feel a good beat.  Other times there is more behind the music and lyrics.  Artists often have strong feelings about the world around them and have the outlet to speak their mind and expose their thoughts to others.  Today I found some strong points in the political rap of Sun Rise Above.

Sun Rise Above, also known as Sun R. A., is a hip hop artist, notable for his leftist political views and corresponding lyrics.  He has been around for a long while in the underground releasing his debut album Global Warning back in 2003.  The beauty of his career is that he never tried to give up on his strong beliefs just to sell more records.  Sun Rise Above has never lost sight of his artistic vision.  Even as hip hop has continued to grow more heavily commercialized, Sun R.A. has stood fast to his promise to deliver rhyme with reason, pioneering his own sub-genre that he calls “Hiphopraganda.”

Recently Sun R.A. has released the full album Still Prisoners Of War.  The 14 track record is stacked with song after song of hip hop with purpose.  The songs are not like the in your face rap snarls of some past artists but instead each song sucks you in with a mellow groove that has you listening to the powerful lyrics without even noticing.  For example the song ‘ID (Papers Please)’ leads with a gentle piano riff before Sun R.A. jumps in leading you through a story of growing up in a harsh surrounding trying to succeed.  The beat stays warm as the flow makes you feel.  The title track ‘Still Prisoners Of War’ has a 1-2 marching beat while the flow explains that you can break free of what the government is force feeding you.  The motto of the album can be summed up in the song ‘Free Your Ass’.  This is another mellow 70’s influenced beat that will have you bopping your head almost instantly.  It may take a few listens to really let Sun R.A.’s message seep in, but he will enter your mind before you know what happened.

Find out more about Sun Rise Above and his message at: 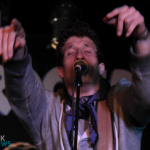