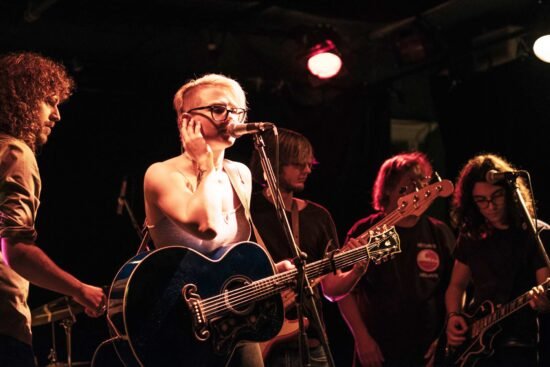 Crafting a genuine, heartfelt single starts with creating a foundation that isn’t comprised of sophisticated verses alone, but of a melodic instrumental footprint that sticks with listeners long after the song has concluded. Wave 21 knows this, and in their new single “Way Far Back,” they establish themselves as ground-up composers who can deliver emotion through so much more than a lush lyrical framework. “Way Far Back” and its parent album Brace Yourself take the basic ingredients of pop, country/rock, and alternative folk, boil them down to their most basic, harmony-first concepts, and present us with the most full-bodied sound of anyone currently in their corner of the world.

Watch the video for “Way Far Back” below

The strings call out to the listener like a long-forgotten memory requesting a reprisal before our eyes, while the drums remind us that we’re living in the here-and-now, essentially leaving us at the mercy of an unstoppable beat for the better part of this single. This doesn’t result in a rush towards the climax, but instead a swell of tension that inevitably feels as cathartic as it does integral to our interpretation of these lyrics. Call it mathy if you please, but this is undisputedly an inventive and neo-classical manner to make a pop track even more appealing and lasting in the public sphere.

Substance is what makes both Brace Yourself and “Way Far Back” stand out above the other releases to come pouring out of the underground in the past year, and with Wave 21’s new music video for this track, they’re keeping the momentum going into the coming spring. This isn’t a moment in pop history where slowing down will get you anything but pushed out of the limelight, but because of how hard Wave 21 is grinding at the moment, I don’t think they’re going to have a difficult time staying on top of their scene and any ambitions they have.