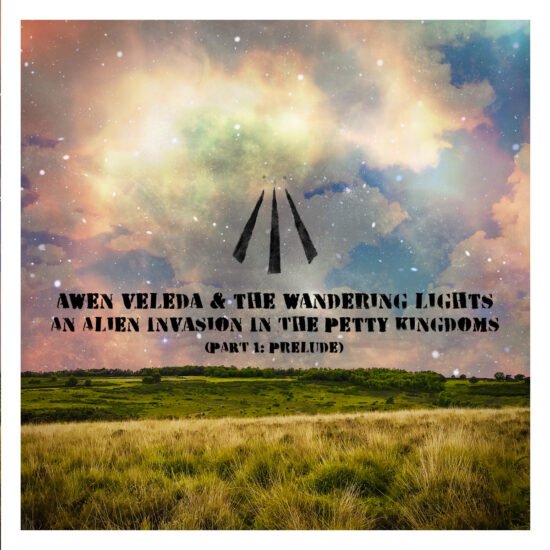 Awen Veleda and The Wandering Lights is an exciting collaboration of talented musicians with a story to tell. Together they have assembled a five-track EP, An Alien Invasion in the Petty Kingdoms (Part1) Prelude. A collection of songs that takes the listener on a journey. All were assembled from an idea by Mike Five (from the band 1infive). He also arranges the music and performs several instruments including, guitars, organ, piano, drums, shakers, tambourines, birdsong recordings, and synth. Adding his voice and lyrics to the project comes GRIM17.  Another prominent member of the group is One Blind Mouse, who supplies the string arrangements. He also mixed and mastered the tracks.

Along with an array of other talents, this collaboration takes the listener on an audio adventure. It all begins with, “On receiving a message telling him of a less than ordinary heathen attack, the King holds an impromptu Witan with his closest generals who council him to take action immediately”. A scene set during the opening track “A Message To The King”.

It opens up with sci-fi style sounds, hinting at the alien visitors. Soon, the acoustic guitars and strings come in to add to the atmospheric mood. Then the story begins, “With the age of Aethelred at our heels / We rode on by night / With a message borne of blood and terror / Bade us both take flight”. As the title highlights, it is a tale about getting the message to the King. A journey filled with perils as confirmed with the lines “By the lesions on our reins only / escaped the ranks of slain / And the journey’s tracks won’t be erased by / Months of heavy rain”.

As the opening words highlights, it’s clear this release is all about the story. With each line, it progresses the tale with some impressive wordplay. To enhance the mood further on the opening track, they enlisted the talents of Gemma Kirk (from Lost Chimes). Her backing vocals add a haunting tone that is equally enchanting. Doing so helps to set up the opening chapter to grab the listeners attention.

“The Witan” is a shorter track that musically has a lot to offer. The various musicians blend their talents to make the tempo jump around with its Celtic vibe. It includes Becca Wright (of Buffos Wake), who offers her fiddle skills. She joins in with the other string instruments to enforce the folk-like vibe.

As the listener reaches midway through the EP, its impressive storytelling continues to stand out. Similar to a style that feels influenced by Jeff Wayne’s War of the Worlds. A song that helps to reflect this is the stunning “The Red Ealdorman”. From the opening lines, “I feel your doubt too / Where you are now / I was once there too / Unsure of what to do”, the vocal quality steals the listener’s attention. GRIM17 lets his voice shine throughout, which has the support of Iona James on backing vocals. Together they use their talents to create this beautiful moment.

However, the rest of the collective deserve some credit too. The soundtrack which accompanies the vocalists offers something special too. Each instrument is integral to the beautiful audio which flows through the listener’s ears. Of them all, it is Ron Bowes and his harmonica which continues to stand out with each listen.

Bringing the story back to the forefront comes “Chieftain Caiside”. Along with it, is the welcome return of Becca Wright (of Buffos Wake) and her fiddle. Her talents help create another Celtic soundtrack to set the stage for the lyrics to shine. They are used to paint the scenes for the story to progress. Of them all, the lines “A wily rogue / Man of his word / Either way, his story is so absurd / It must be true / I’ve seen the signs / I no longer feel warmth from Southern skies” stand out the most.

Awen Veleda & The Wandering Lights (with Rae Cameron on the flute) let their talents shine the most with their final track, “Lucrezia”. It opens up with some soothing bird noises before a delicate acoustic guitar comes in. Again, GRIM17 delivers another outstanding vocal performance for the final part of the story. He does so with the lines, “Came, though I didn’t want to / The need was too strong / Stayed away as long as I could, but / It was you all along”. But, this time around, he shares the spotlight with the delicate and beautiful voice of Sadie-Rei (from Until Further Notice).

Together, their voices intertwine to deliver something special. Both share their words without urgency and giving the lyrics time to breathe when necessary. Personally, they are at their best when they share the lines, “Take the light from my crown until / I’m worthy again / Don’t let me down / Don’t forget the things I do now / If it succeeds in the end / Don’t let me down”. The music is gentle and flows similarly to the vocals. It all comes together to create the standout moment from the EP.

As the title suggests, An Alien Invasion in the Petty Kingdoms (Part1) Prelude is just the beginning of the story that they want to share. The calibre of the music they have created so far makes us want more. Hopefully, Awen Veleda and The Wandering Lights will continue with this project and let the listeners know how the story will continue and eventually end. 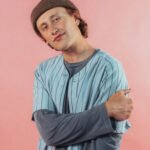 Jackson Lundy Reminisces With "Mrs. Principal" Previous
Brace Yourself For Wave 21 Next 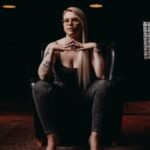