When there is art inside a person it manifests its way out in many different avenues.  There are people in this world that just are born with a bigger creative side and a need to expose it.  Add in a little determination (which sometimes lacks in creative types) and you have a true star.  Our latest find Bernie Journey seems to be putting both his talent and dedication together to create something extraordinary.

Originally hailing from Cleveland, Ohio Bernie Journey was in the heart of great rock n’ roll from birth.  Early favorites included Elton John, Donna Summer and Aretha Franklin.  The seed was planted but at the time painting was his artistic focus.  When the new wave of dance pop artists such as Madonna, Prince, and George Michael hit Bernie was drawn in more and began piano lessons and fell in love with the freedom to express himself through songwriting.  He later moved to New York City to immerse himself deeper into the music.  Much time was spent playing shows and experimenting with his sound.  Bernie Journey’s message of viewing life from a positive and inspirational perspective resonated well and new fans were being picked up at a rapid pace.  It spread beyond NYC as well as he rose to #5 Nationally and #14 Globally on the ReverbNation Dance Music Charts.

There is more coming soon from Bernie Journey.  On December 30th 2014, to end the year with a bang, he will be releasing his newest song “Are You Thinking What I’m Thinking?”.  The track brings it all together with a funky old school melody mixed with new trends in dance music to create something fresh and ready to take over the dance floor in 2015.  Enjoy a taste here:

Keep up with the rising star at: 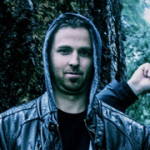