Imagine the term “summer single.” You’re probably thinking of the latest offering from pop stars Miley Cyrus, Justin Bieber, or Ke$ha. Not all of these tracks are confined to mainstream pop, though. Sometimes songs with the big, powerful hooks that become permanently lodged in the ear for months come from the indie rock world. And “Goodbye to All That” from Brooklyn’s own Cold Blood Club is exactly that kind of single. 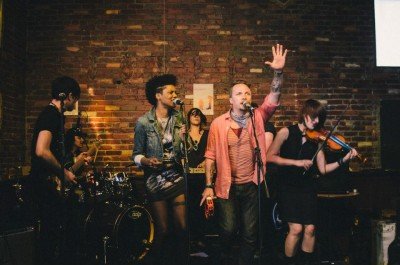 Debuting last Tuesday at their video release party at the Bowery Electric, the single is an exercise in exactly how organic a way a song and a band can come together. The song and the video were recorded and filmed simultaneously (tracking during the day, filming at night), and as a result, both are intertwined in a way that captures and presents the band in all its glory, without any pretension or smoke and mirrors. This is a rock band being themselves, having a great time, and with every frame and note showing exactly how much.

Cold Blood Club is one of the best new bands blending electronic and live elements to serve up infectious danceable indie rock in the tradition of the great New York artists like LCD Soundsystem and Yeah Yeah Yeahs, with elements of New Order and Depeche Mode. They formed in 2011 when guitarist/songwriter Tom Stuart met singer Kendra Jones–whom Tom calls a “muse” of the NYC music scene with a magnetic personality–and started writing songs together. The band also formed in a way after Tom and bassist Jesse’s old band Radio America “fell off the rails.”

“I remember I was out at a show one night,” Tom says, “and I was telling my buddy Sean [Gavigan] from Raccoon Fighter that I had a pretty good run. I’m not doing this anymore. Me and Jesse and the guys, we had a pretty good run. I’m pretty satisfied. And I woke up the next morning. It was like a Sunday morning in my apartment, and I was like, what do I do now? And of course, because it’s ‘do what you know,’ it was like, well, I guess I’ll start making music again, event though I declaratively gave it up last night.”

Tom then started making demos, playing beats and the synthesizer himself (swearing off guitar for a while). After a few weeks, he recruited Kendra and Bradley to sing (Tom also swore off vocals for CBC). And although for a while the band was Tom, Jesse and “Macbook,” soon the lineup was complete with Jesse, Adina on keys, Shin on drums, and Hilary on violin.

Cold Blood Club also seems to be a result of happy mutual connections. All the members are mutual friends who’d worked on various projects together. Shin had played with Jesse before for singer-songwriter Angela Jane’s project. Similarly, Adina had mutual friends with the band, and as a trained keyboardist who loved to play piano, she found herself at a band rehearsal, and joined soon afterwards.

The spirit of collaboration is strong with Cold Blood Club. “I’ve always kind of wanted to be in a E-Street Band,” Tom says. “So you pick your spot, tell me what the sonic register is, and we’ll figure it out from there.”

Probably the coolest thing about “Goodbye to All That” is how it’s not just a summer single, but a decidedly New York summer single. The song features the Lower East Side and Bushwick prominently (mainly because “Long Island City” and “Greenpoint” are harder to rhyme).

“It’s the Neverland concept,” Tom says when asked about the neighborhoods featured in the song. “Wherever you are, you have the feeling of time being suspended for a moment. And I feel like in certain neighborhoods of New York City you have a feeling of the suspension of time and space. It’s speaking to this idea of like, tonight can be three years long.”

Nowhere is this feeling more apparent than in the video for “Goodbye to All That.” Brilliantly directed by Kris Merc and filmed by cinematographer Ahmed Klink, it shows Tom, Adina, Brad, Kendra, Shin, Jesse and Hilary going out, singing karaoke, and having a grand old time. Shin says “There’s definitely a theme.” And most of it is celebrating New York City. You can’t help but be caught up in the celebration, and you can’t help but remember the nights that you yourself have immortalized in memory.

“When you watch it, you want to do what we do,” says Adina.

“Anybody who knows New York and is of a certain age,” says Tom, “knows that feeling.”

The video for “Goodbye to All That” will go live on Monday. The single is available everywhere now. Cold Blood Club’s next show is July 23rd at Bowery Ballroom.

Find out more at: http://www.coldbloodclub.com

For more about recording cycles, whether the concept of the “album” is alive or dead, and the creative process in general, check out the full unedited audio of the interview below: 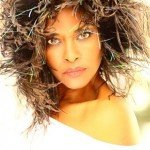 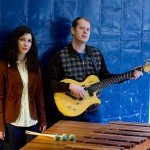