I still remember the first time I listened to Kate Bush. I was a bit of a late-bloomer to be indoctrinated into the beautiful, yet haunting aura of her songs. I also remember the first time I listened to Tom Waits. Again, I was late to be exposed to the ways of his unconventional, not really folk, not really rock – but instead… well, I’m still at a loss of words to adequately describe his musical offerings.

In a way, I’ve relived a combination of those experiences at the same time with my recent exposure to Curse in the Woods. Their bio acknowledges the Waits influence which is certainly evident, but there is also that beautiful, yet almost frightening Bush-like feel to their songs. One noted difference would be that Jeanie Taylor’s vocal presentation is more of a lower-register “Kate” – kind of a “relaxed Kate” with a touch of Feist. However one might describe it, know that it works, and where at times Bush’s theatrical vocals can almost wear out the listener – Taylor, along with her accompanying troubadours, instead sort of subtly creeps up on a person in a whimsical, yet eerie, manner.

The band (Group? Clan? – yes, they’re that difficult to pigeonhole) evidently came into existence when Taylor, a seasoned theatrical vocalist had a chance encounter with an accomplished accordion player (Sam Harvey) in a Montreal metro station. From that core the seed of a vision sprouted resulting in the addition of not some, but seven additional members to their line-up who have quite an impressive pedigree of formal training in the musical arts. Their instrumental background includes being versed in everything from piano, accordion, upright bass, guitar, violin, percussion, trombone, tuba … (I could go on) … and one of them is even dedicated purely to “video creation and projections.” This makes sense when experiencing the “projections” in one’s mind while listening to their songs from their first full length album – 2012’s “The Deals They Made.” 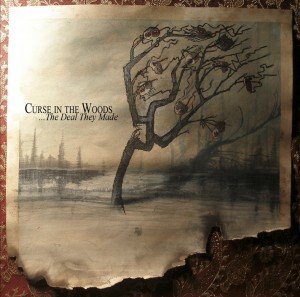 The opening song “Perfect Lawns” gives the sensation of being introduced to a group of travelling gypsies who are sort of playfully taunting the listener. Musically, it’s “Feist-ish” in some ways with a tuba bringing up the bottom end, while lyrically the song has a biting ironic flavor about a culture of gated communities with “so much to lose.” The album quickly moves from feeling whimsical to a tad demented during the second track entitled “Echoes” – as Taylor’s voice accompanied by piano/organ starts sounding more spacey.  The song is quite ethereal and builds to expose the experimental playfulness of the band. “Rain is On Its Way” introduces the listener to a kind of up-tempo, storytelling, almost vaudeville-esque vibe.  I want to note that the songwriting throughout the album is chock-full of interesting, and unpredictable shifts. On a number of occasions this reviewer was reminded a little of Elvis Costello with the unsuspecting chord progressions and melody twists. “Chevrons” and “Walking in the City” are two songs in particular which harken me back to what I like about many of EC’s curveball-to-the-head song journeys. It’s actually very wonderful so long as, in this case, you’re not starting to get too spooked.  I wouldn’t recommend listening to this album alone in a dark room at night (and I’m only about half-kidding).  Still, in the midst of darkness there remain elements of “light” and continued accessibility. In this way, the album sort of toys with the listener, because just when you think you’re going to plunge into the point of no return, the song will lighten up and become almost jovial. Also, the production of Taylor’s voice doubled over itself is just plain fabulous. Based on this, the song’s unpredictability, its arrangement, and its atmospheric effects – “Walking” might be my personal favorite cut on the album. The song “Widow” exposes some excellent musicianship with the time signature and rhythm going a little jazz-ish on you, then almost classical – while through all this maintaining that certain nightmarish quality. It’s quite amazing, really. Lyrically the song introduces the theme of the album title. After a brief, acoustic instrumental breather number (“Pas La” featuring distant chirps and crowing), the listener plunges head-first into three songs (“The Beast,” “Carnival,” and “Curse in the Woods”) and gets taken progressively deeper and deeper into creeps-ville. In fact, you might sense that “something hovers” – and – “you can’t smell it, but you can tell that it’s there.” This “Beast” is accompanied by very prolific violin virtuosity. Not only that,  you enter a “Carnival”  that exposes you to “organs grinding into the night” while the song itself drops in and out of minor chords, with a stereo-bouncing lead vocal, a circus piano, and a frightening lament of someone looking for a child “where the carnival used to be.” Then the “Curse in the Woods” attacks you with a romp of an almost dissonant piano riff and gives you the impression you’re taking part in a kind of pilgrim’s chase through a dark forest. Fortunately, you finish the album with a somber, yet lighter, almost early 60’s soul-pop “shoo-wop” from the tune “Wise Up” – while all the while wondering; “What just happened?” “Did Shakespeare, Edgar Allen Poe and David Lynch join forces and write me into their story? “

Know that if you’re stuck in your “conventions” you shouldn’t even bother with “Curse in the Woods.” Keep your name tag on and attend your next meeting. There will always be countless corporate selections to choose from. However, if you’re someone who enjoys going off the path on occasion (and into the woods), then pick up “The Deals They Made” by Curse in the Woods. The album is there for you, just have a listen.

I mean… even though you can’t smell it – can’t you tell it’s there?

Go listen and learn more at: