As the year end approaches the radio usually turns to the same old Christmas songs that have been so played out that it becomes almost annoying to listen to them.  If I hear Mariah Carey belting out “All I Want For Christmas” one more time I may lose my mind.  This year I went searching for something a little different for my holiday listening pleasure and I found just the fresh sound I was looking for with the album Hollywood Drunks Christmas. 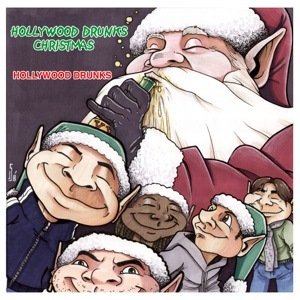 After some real life experiences that may have broken a man with no sense of humor, singer songwriter Eric Winzenried found his voice in sarcasm, self-deprecating humor, and even a little bit of anger.  Like minds were not hard to find when he went looking for bandmates and The Hollywood Drunks were formed.  This group of L.A. misfits came together perfectly to form something different and very relatable to the music hungry masses.

The band decided to grab the holiday season by the horns and put together a collection of their innovative versions of Christmas classics.  The album Hollywood Drunks Christmas is an 11 song testament to how even old stale songs can be updated to become something fresh to listen to.  When you hear songs like “Do You Hear What I Hear” and “Winter Wonderland” brought with the funk vibe of The Hollywood Drunks, you are tempted to go pour another cocktail for yourself.  The instrumentation has touches of reggae, funk, and classic rock that provide a fun spin to the standards.  The best track on the record though may be the Hollywood Drunks original “Looks Like Christmas”.  This fun sped up little ditty has all the elements of a christmas party sing along including a memorable chorus.  The breakdowns keep the song constantly changing and never getting dull.  I had it on repeat for 40 minutes without even realizing it.

The boys are in the Christmas spirit and are offering 3 free song downloads at: http://www.hollywooddrunks.net/free-track/

Indie Band Guru heartily suggest that you put the Bing Crosby and Elvis Christmas albums aside for a while and enjoy the party that is Hollywood Drunks Christmas.  Get the full album at: http://www.hollywooddrunks.net/hollywood-drunks-christmas/ Are You Ready For Your Holiday Parties? Here Is What... Previous
The Yellow Dress - Best Of Local Scene Creates Avalanche... Next