Music is not always supposed to be cheerful and full of smiles and butterflies.  Many very successful musicians have some very dark thoughts bouncing around inside their heads.  When these are released it has been known to create some very original and amazing music.  Our latest find, Human Behavior, may fit well into this mold. 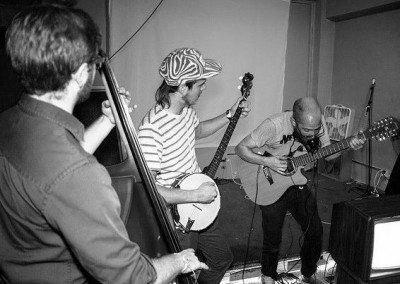 Human Behavior is the brainchild of singer/songwriter Andres Parada.  The Tucson, Arizona native has had some mental struggles at times with depression and even earned himself a stay at the Sonoma Behavioral Health facility.  Upon his release, maybe not the best for his mental state, he moved into his grandmother’s abandoned house where he lived alone.  The positive side is that during this time he wrote over 40 songs, a musical, and recorded hours of video footage, all of which documented his struggles.  Utilizing these videos along with banjo, accordion, violin, multiple drummers, upright bass, and a 4-piece female choir, Human Behavior created a completely unique performance.

Last month the project released their first official full length through Folktale Records entitled Golgotha.  The 13 track album explores many dark and confusing thoughts through Human Behavior’s unparalleled style.  Opening song ‘Crag’ is an aggressive folk track that builds to a full on assault on your mindset.  The unfiltered instruments create a raw emotion that is shared by the listener.  The mellow ‘Always Cold’ slows it down a little with a beautiful female vocal and an interesting percussive beat that creates a warmth even though the story is quite dark.  Another interesting song is ‘Vintage Dad’ with its awkward vocals that seem to clash over eachother.  There is an uncomfortable beauty to this song.  Album closer ‘I’m Sorry Hosanna’ has a country tinged guitar to it while the folk story being told draws the listener in for a closer look.

Human Behavior’s Golgotha definitely makes for an interesting listen and I recommend you take the time to check it out at: http://www.humanbehaviormusic.com/ 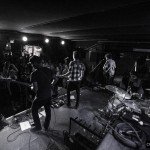