There are certain qualities in every great artist that are easily apparent five minutes after meeting them. There is the work ethic, the drive, the professionalism, and talent, mixed with healthy amounts of authenticity, geniality and self-awareness. No real artist or band can get anywhere without those qualities. Of course, they also have to have great, solid songs. Von Shakes is that kind of band. 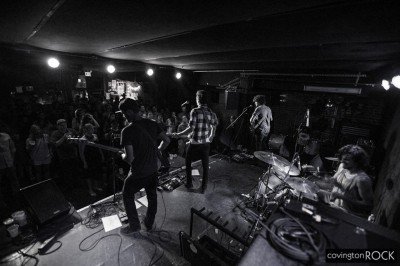 Hailing from Dublin, the Brooklyn-based indie-rock four-piece has been gigging all over New York and throughout the country for the last 18 months. They received quite an old-school Brooklyn welcome, too. After first couch-surfing for six months, the band settled in Flatbush.

“It was great because we had all our guys from back home there,” says bassist Killian, “but it got to the stage where there were shootings. One of the guys we were staying with had to walk through a puddle of blood to get on to the subway. We were like, ‘This is getting dodgy. We need to move.'”

Now settled in much friendlier, busier, and creatively-charged Bushwick, the band is busy playing out in advance of their upcoming album. The band says it’s their first “real” album, having learned and grown as musicians and people since their first record, THE ROUTINE, was released in 2010.

The band had met well before that. Singer Patrick, guitarist Hugh, and Killian all knew each other from school in Dublin. They decided to start a band based on their shared love of classic rock, which Hugh and Patrick’s attribute to their parents. Hugh even says his greatest influence is Jimi Hendrix, a fact that’s abundantly clear in all his guitar solos (more on that later). The scene was very competitive, with a “big fish, small pond” scenario, and breaking out in Dublin was much harder than expected.

“Some people who were doing well,” Hugh says, “who were selling records, still had to make sure their shifts were covered at work.”

Since the release of THE ROUTINE, the band has played internationally, scoring gigs as far apart as Germany and Russia (which Patrick says was “AWESOME!”). Their EP, ALMOST NOBODY, got the band wider recognition. The video for the single was also awesomely DIY. It features singer Patrick running through Dublin streets at nighttime, with a projector throwing up the image of the video’s heroine on actual buildings, producing a striking image.

Now the music. Yes, they are indie rock, but they are the purest kind of indie rock. With the energy of the Arctic Monkeys, the real-life inspired lyrics of the Wombats, and tighest melodies this side of the Kosciuszko Bridge, Von Shakes are a testament to the timeless power of four friends playing music they love in a room. There are Hugh’s soaring-but-grounded guitar solos, Patrick’s impassioned and sincere vocals, and Killian and Ryan’s solid and engulfing rhythm sections. And wonder of wonders, there is not a single Macbook effect in sight!

“There are only four sounds you’ll hear in our music,” Patrick says. “Bass, drums, guitar and vocals.”

And that kind of efficiency and purity in indie rock is something to be celebrated.

For much, much more on the band’s origins, Dublin vs. New York, and the philosophy of creating a record, check out the full interview below:

For more info and to keep tabs on Von Shakes visit: http://www.vonshakes.com

*- article and interview by Anatole Ashraf of Indie Band Guru

BigBangZoom - Returns With More Music Videos With A Message Previous
Human Behavior - Awkward Prettiness In Song Created By... Next