Insane Prototype – Powerful And Dark Rock From Russia With No Love

The music scene in Russia has still been left pretty much untapped even after the fall of communism so many years ago.  The craziness that ensued a few months back with the punk band Pussy Riot may be the exposure needed to expose the varied music being released in that country.  Techno and breakbeat have been heard out of Russia before but now we discovered an energetic mash-up of styles that needs to be heard by the rest of the world in the band Insane Prototype.

The band formed by Dmitry “Dekeey” Kalinin, from well known Russian breakbeat band The Phase, and Andrey Knyazev creates a kind of dark epic metal heavily influenced by progressive rock.  There seems to be a lot of suppressed aggression in there music that may be the result of being locked into their own corner of the world for too long.

Yesterday Insane Prototype released the album These Seven Words Do Not Mean Anything.  The record begins with the minimalistic song ‘Interlude N3’ to lull the listener into a false sense of security before tracks like ‘Demons Of The Past’ and ‘Prey To Passion’ attack the senses with a full on assault.  There are touches of old Deftones and Korn here.  Dark power rock at its best. ‘Void Reflection’ seems to have some anger built into it as well with the intermittent screaming over powerful guitar chords.  I found myself grinding my teeth as I listened.  There is talent and attractive energy all over this record that would fit in well in any country with disgruntled youth.  This is definitely a recommended listen for a good pump out before a night on the town.  Go get some energy for yourself at: http://insaneprototype.com

Promote Your Music - Mobile Ringtones Still Offer Great... Previous
The Hollows - You Missed The Party Live At Mercury Lounge Next 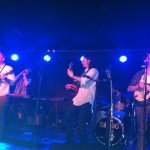