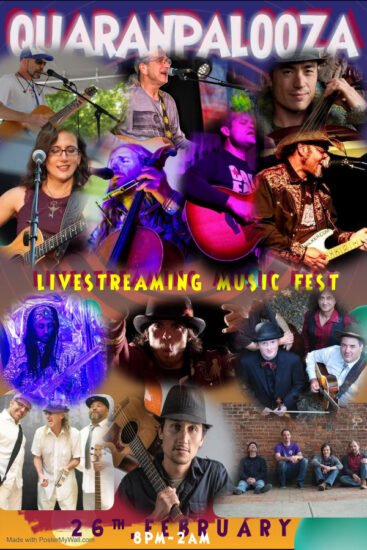 We can all agree that this has been an extra challenging year for anyone involved in the music business. But challenges will arise in any career. The people that find ways to rise above the challenges are the ones that will find success. Our friends John Rybak and Cello Joe needed a way to keep playing their music live for fans. They found it in the formation of QuaranPalooza.

The next QuaranPalooza livestream event is February 26th at 8 PM EST.

We had a chat with the duo about how it came together and where it goes from here:

First off, what is it that draws you to music?

John Rybak: For me, I was born into a musical family, my Mom’s cousins own the largest guitar store in the world, House Of Guitars, back home in Rochester, NY. My Uncle was a gigging musician and was oftentimes awakened by some acoustic guitar strumming and singing in the wee hours of the morning when I was a young kid. Music always took me to a different place, a different world and when I started seeing The Allman Brothers, Grateful Dead, and Phish I was always drawn to the improvisation, the excitement of new ideas and spontaneously creating in the moment. And of course how it drew people together, people from all kinds of backgrounds and walks of life, and the bridge that the music and culture provided for everyone to connect with each other, and realize we were all like minded even though we looked or seemed different. That’s what makes music such a healthy thing to me, people are truly comfortable feeling like they can relax and just be themselves.

Joseph Chang aka Cello Joe: Music is life. Music is Magic. Music has power. Music can comfort those in pain, it can uplift those that are in a rut, it can inspire people to change, it can save lives. Plus, it’s really, really fun. Try dancing without music. It’s not quite the same.

It has been a crazy year but what finally prompted you to start QuaranPalooza?

John: It was a very long road for John Rybak + Friends, and we worked our way to a place where we were gigging once, sometimes twice a week. Played The Boom Boom Room and were set to open for Mark Hummel at The Ivy Room. The fiddler and I were in a place where we would always take a playing opportunity, then get an upright bassist on board after we booked the date. It just didn’t make sense to throw it all away when March 2020 rolled around and I started playing some of the online open mics when I could. It was kind of a succession of realizations. First realizing that I really needed to continue playing regularly or forget songs, chord changes, tempos, rhythms, lyrics. There was a lot at stake, years of rehearsing and gigging. Then came the missing musicians, bandmates, and just people and playing out in general. First I was trying to spread the word about the open mics and invite friends to play. Then I realized that I was doing the promo legwork I would for the gigs and decided it needed to be more gig-like for other musician friends to become interested. After the first one back in May it was clear how happy it made people, musician friends needed to continue to play, be heard, and be seen, and friends and family were just happy to see and connect with other friends and family.

Joe: John Rybak proposed the idea and asked me to play at it. I had already organized a virtual music festival for a stage at Lucidity Festival called the Dusty Barrel and I’ve used online ticketing platforms like eventbrite and I had a pro account on Zoom, so I said I could help with the backend logistics. I had also changed an event called the Cello Madness Congress I had booked for the end of March to an online event. That concert series is still going strong and happens two times a month. The web site is CelloMadness.com

Has the online community supported your efforts?

John: Yes, it definitely didn’t happen overnight. People were reluctant at first I think just because there’s really no replacing the whole going out experience or real in person live performances. I’m always trying to think of new and creative ways to get people onto The Zoom every month. I think little by little people realized that it was worth the time investment, and if they gave it a chance it would bring them happiness, especially during the isolation of lockdown. They could connect with others and support and applaud for some very talented musicians. I guess it is a lot to ask, people have to change out of their jammies and be on camera. The viewership on Facebook live gets better and better every month, we’re proud to say January QuaranPalooza has 2,700 views, that’s a number we’re very proud of.

Joe: Yes. Support has mostly been from friends and family of the artists. The missing piece of this puzzle is actually getting the word out to outlets like this one and encouraging people to support smaller artists. Sure you can watch videos of big name artists and you can watch streaming services or play video games, but how often do you get a chance to have a feeling like you’re backstage in the green room hanging out with a bunch of musicians and able to just chat and ask questions and connect with really great artists in such an intimate scenario?

What tools do you use to livestream from your own personal home studio?

John: I have a Rode interface and an AKG omni-directional microphone I use. When I solo-stream I use OBS and restream.io, for QuaranPalooza I go straight to Zoom. I battled a lot of connectivity problems when I first started so I had a complete overhaul done here, all the copper wiring was replaced with fiberoptics and the router was replaced as well. I also use a hardwired ethernet connection from the laptop straight to the router when streaming. That, and restarting the router and computer every time before streaming have made a world of difference. My laptop lacks an ethernet port so I got an ethernet to USB adaptor – works great.

We understand there is a charity aspect as well to QuaranPalooza. Tell us about that?

John: Yes back in October, for the Halloween show we decided to call it “costumes for cancer” Where you purchased a ticket, and got to attend a Halloween costume party. We donate 25% to Bay Area Cancer Connections, decided that was the most meaningful cause as we have lost some family members from Cancer, my Mom is a Leukemia survivor and we have a performer who is a Breast Cancer survivor. We raised and donated $91 last month and have a modest goal of $100 for this month.

Joe: Back in October we decided that we wanted to uplift peoples’ spirits with music and also support a cause financially so that people would know that they’re not only helping struggling performers, they’re also helping Bay Area Cancer Connections and the important work they do. BACC supports anyone affected by breast or ovarian cancer with personalized services that inform and empower.

How do you choose artists to feature on the showcase?

John: I watch and enjoy a lot of streaming online, if I see a stream and it moves me I’ll ask them to play. I’ve been gigging and booking shows since 1996 too so I have a lot of musician friends and connections I can ask. It also has a lot to do with what kind of energy and positivity is being projected. We’re very fortunate to have a group of such wonderful supportive people and it’s created a very positive culture and really is a musical family. Some performers come and go, and maybe play just once, we did have Grammy winner Chubby Carrier play back in August connecting from New Orleans, oftentimes we’ll have a guitarist from Malaysia. I do love that we have a lot of cultural diversity as well as musical diversity.

The next episode (#10) set for Friday February 26th looks amazing with a solid lineup. How did it all come together?

John: We had such a fun show on NYE, it started at 7:30PM, we had two Happy New Year’s toasts, one at 9pm for our East Coast friends, and one at Midnight. After that, it just turned into that kind of party that didn’t want to end. I think I finally signed off of The Zoom and crashed at 3AM. After that sort of epic experience, I really wanted to try and recreate that kind of experience and thought show #10 was the perfect time for it. It was a little trickier, finding time slots that worked for everyone, some performers have kids, or live in apartments or just can’t be playing live music late at night. One band is in Albany, NY so then the 3 hour time difference came into play. It really is a great lineup with some very solid talent and performers. It’ll shade a little more towards electric performers, looping, beatboxing and just all-around funkiness, especially into the later hours.

Give us a look at the future of QuaranPalooza.

John: I feel there’s enough interest and support to continue on every month, we’re aware that some venues, bars, breweries are opening back up and the warmer weather will be here and gigs will start to happen again. We’ve said it’s so much fun maybe we could continue even when everyone gets their vaccinations. I think especially with the cross-country and sometimes even people in other countries being a part of it, it’s grown into something very special and extraordinary that you can’t experience at a regular gig or festival.

Joe: Well, when life starts getting back to normal, we’ll probably have to change the name because we won’t be in a quarantine situation. Maybe it will be a hybrid live/online event. If anyone out there reading this has a good idea for a post-pandemic name for this concert series, we’d love to get your suggestions!

Learn more about QuaranPalooza at the FACEBOOK EVENT page

Tickets are available on EVENTBRITE

$15 tickets get one into the festival (onto the Zoom) and a percentage will be donated to Bay Area Cancer Connections. 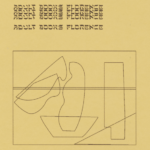 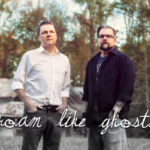