We always keep our eye out for new musical genres that emerge from the underground.  Combinations of different styles have often become huge genres of their own.  Today we were introduced to something called Psychedelic Soul. It’s definitely an interesting combination with potential.  The band showing us the way into this space is J_Dub & The_Tease.  And yes those underscores belong in the band’s name.

The band hailing from the crowded musical scene that is Austin, Texas could be determined easily as you start hearing their sound.  It is a mix of melodic basslines with driving guitar and mellow lullaby-like vocals.  J_Dub’s voice could stand well on its own with just him and an acoustic guitar.  It rung out to me similar to Sting’s vocals during his solo career.  Now mix in Trevor Of Doom on bass and Cam Rogers on drums providing an interesting yet smooth and melodic background, and you have something quite listenable.

Plans for J_Dub & The_Tease is to release a new album called Moon & Stars Part II towards the end of September.  From what I have heard so far it sounds pretty damn good.  Reminiscent of some mid 90’s college rock like The Lemonheads and JAWBOX.  ‘Mess Of Me’ is a perfect song to listen to in your bedroom with a groove to make you smile even though the lyrics are not exactly about good times.  Another song that must be very interesting to watch the band play live is ‘You’.  I truly don’t think there could be someone in the crowd that could resist the urge to sway their body back and forth.  That sounds like Psychedelic Soul to me.

Bottom Line: J_Dub & The_Tease is an Austin band to keep a look out for.  Their infectious grooves could definitely catch on with the masses once we get rid of fake dance pop like Katy Perry and Justin Beiber.

To hear more go to: 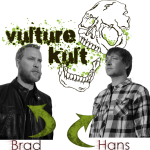 Vulture Kult - What Rock 'n Roll Really Stands For Previous
Jaebone- Rapping In Every Style With Visual Talent To... Next