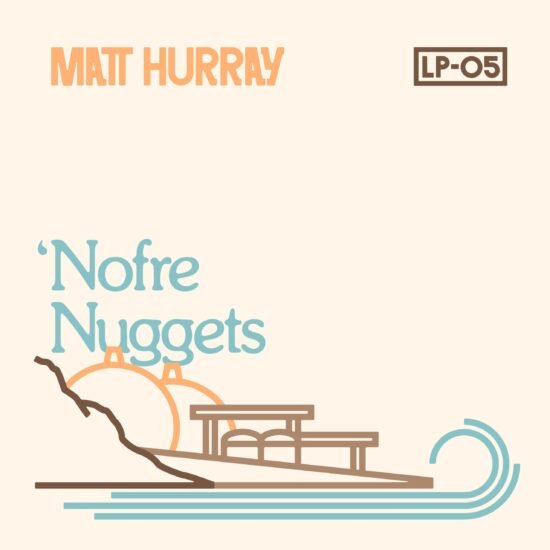 As musicians, we all have the music that inspired our childhoods, even before we knew we knew we wanted to be a musician. That sound that would draw us to be creative and become the soundtrack of our youth. Our recent find Matt Hurray has taken this very seriously and has now released an album of covers as a salute to those songs that shaped him.

Hailing from Balboa Island on the Pacific Coast of California would have a major influence on Matt Hurray. By the age of 15, he was drawn to playing guitar and music had its hooks in him. Playing in a bunch of bands over the years helped Matt build his skills as a musician and songwriter. Soon after a solo career was started focusing on the instrumental surf music that was a huge part of his lifestyle.

Now Matt Hurray has just released his fifth solo album. This one entitled Nofre Nuggets is a salute to some of his favorite surf tunes recorded from 1960 to 1964. These were the songs that played the soundtrack to his youth as he listened to them non-stop as he was heading out to surf the waves with his friends.

Right from the opener ‘Pipeline’ we know what we are in for. High-end surf guitar bringing us back to an earlier time with no cares in the world. For the soothing ‘Endless Summer’ theme Matt brought in his daughters Caitlyn and Natalie to provide the background vocals. The family affair adds to the happiness that oozes from the track

While still deep in the surf style, we get a little Spanish guitar added with ‘El Conquistador’ Matt is able to bend his sound to provide some energy while still staying deep in the surf pocket. “Apache” is another one that blurs off the surf style slightly with some powerful guitar strumming flush with delay effects to keep us in the zone.

The drumming and bass guitar takes more of the lead on ‘7th Street’ to fill out the sound to an almost pure rock tone. The bouncy playing fills all the sonic space available. This one fully encapsulates the listener. As we get to the closer ‘Telstar’ our heads are squarely in that time of worry-free summers when nothing matters but the sun, the breeze, and the surf.

Keep up with more of the fun of Matt Hurray HERE. The Silvers Want To Know ‘Who Do You Think You Are’