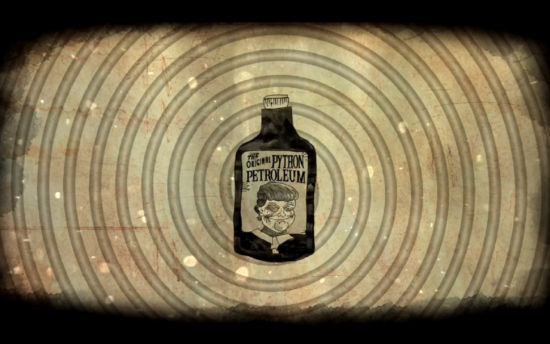 It’s hard to believe anyone can remain anonymous in the year 2020, but one band that can continue to do so is the folk/rock duo Newspoke. The band’s new single “Python Petroleum (or Must Be Tough to Carve up the Resolute Desk Into Firewood and Other Forms of Combustibles)” is an obvious dig towards the present administration. The accompanying lyric video and clear lyrics give the orange man the same treatment as a snake oil salesman.

Newspoke, based in New York City, open the song with a strumming guitar, a rousing male vocalist sings with clarity and cadence. Now take a sip of happiness…no just glaze on over, while I set the world on fire, he sings. His voice has the crisp timbre of a beatnik and the exhaustion of a farmer. The sound that is harvested is very daunting, but intimate in a way that could well be performed in any coffeehouse on the East Coast. It has that dingy, New York club vibe too.

What makes this protest or politically charged song so riveting is that it’s written as if it were a letter from Donald Trump. Wait, base, it’s been so tough, how do you sleep at night? Give me some tips cause carving the resolute desk is failing to make my head right. How do you sleep…it must be tough after all I’ve done to make this honor drift out of sight. Man, it must be tough, sings the vocalist. Just when you think you have empathy, the satire overcomes you and you’re reminded that there can’t be any empathy, no room for emotion. It’s a stirring reminder and clear division that this song and the administration has presented.

Even if you were listening to this song as a Trump supporter, you would be eerily reminded of the audacity in the singers’ voice. It’s as if the echoes of Woody Guthrie and Pete Seeger were penning this tune, and singing with both sincerity and seriousness. This songs stings in its truth spraying; it’s the song that bolsters a universal sentiment. The consistent and even-keeled tenor in the voice is poetry in motion. He’s not mad, he’s not over-singing. He’s staying in this very even-tempered range. It’s the antithesis of the chaos and imbalance in the world.

The accompanying lyric music video captures the old timey spirit of bottled elixir. With just a few changing images of a Trump-like caricature on the bottle, and the mouth opening and gulping down the same smiling Trump image, the brown and beige-colored pallet is an interesting choice. It feels vintage and it creepy at the same time.

Overall, “Python Petroleum (or Must Be Tough to Carve up the Resolute Desk Into Firewood and Other Forms of Combustibles)” is most fiery in its lyrical content. The vocals and the musical flow are solid and stoic reminders the prevailing logic left in the world. No matter your political affiliation or tendencies this song leans heavily into the win column. Newspoke does it again. 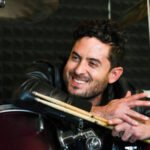 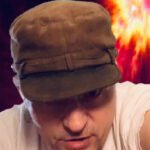