In today’s “give it to me now” society with no attention span it is rare for a musician to take his time releasing a follow up album.  This quick rush has been the downfall of many a career when a rushed product is markedly inferior to the record that preceded it and a budding career is dead in its tracks.  Our latest find Paul Maged has taken his time to put the most he can into his sophomore effort.

The passing of his father at a young age pushed Paul Maged into songwriting as it helped him deal with a rather tough time.  These songs became his first album, In My Time.  The pop-rock album with a raw garage feel caught some attention and even had the single “Falling Down” featured on MTV programming.  Paul was willing to put in the hard work to secure a professional music career and in turn studied music at the Boston Conservatory and American Musical & Dramatic Academy in New York.  He describes himself as a singer/songwriter but is much more than that.  He is an alternative rock artist that brings in punk, grunge, classic rock, indie pop and a dramatic flair to his sound that makes it stand out.

The latest release from Paul Maged has been in the works since 2011.  The passion has become the 17 track album Diamonds & Demons.  Right from the opener “Look At Me” you know you are listening to a real artist that is not afraid to tackle the tough subjects and speak his mind.  Enjoy the video here:

Paul shows some diversity with “Images” which has tastes of an Elvis Costello influence while staying powerful and meaningful.  The title track “Diamonds & Demons” is the most in your face rock track of the record.  It creeps up and pounds you into submission, and you will be humming the chorus for days.  The mellow and aptly titled “Somber Song” gives another example of a man who will pour his heart and emotions into a song.  There are a few misses that sound a little too reached but overall this is a very entertaining record that deserves a full listen.  Go get a taste of Paul Maged at: www.paulmaged.com

Dr. Dance - A Lifelong Dream Fulfilled To Dance Away... Previous
Michael Wien - Knows Music Is A Serious Business Next 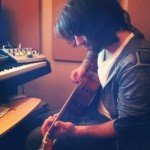