Rhythm Of Mars – Soundtrack Music Creating Visuals Without The Movie

Not all bands are created by a bunch of teenage boys yearning to be rock stars and play at Madison Square Garden.  In today’s society there is music everywhere from TV commercials, to film scores, to elevators, and it is usually not these prepubescent boys that make it.  Sometimes the strangest meetings end up creating the most original music to fill these needs.  One such story is that of the group that calls themselves Rhythm Of Mars.

The chance meeting of guitar virtuoso Aaron Straub and classical pianist Patti Unruh has developed into a musical juggernaut of talent focused on writing instrumental pieces for film soundtracks and similar situations.  These two surprising songwriting partners have now teamed up with recording engineer, musician and IndyGo Studio owner Mike Bailey in Fayetteville, AR.  He provides the technical recording expertise and rhythm section to bring the music together as a finished piece.

The Rhythm Of Mars trio recently released Beyond Dreams, an 8 song album featuring an eclectic mix of songs composed with the hopes of picking up some soundtrack selections or publishing opportunities.  It is indeed beautiful background music.  The musical talent of all three individuals within the band is what jumps out at me right away.  From the piano lines to the high pitched guitar wails this is a sound that I could see behind many different types of visual stimulation.  One song that struck me was the sensual ‘Allie’s Song’ with its impressive guitar work over a straight ahead, almost simple sounding piano beat.  ‘Spanish Flyze’ reaches out for a different kind of audience with a slow building piano line accompanied by some Spanish influenced guitar note bending.  Intriguing to say the least.

Bottom line:  They must be doing something right because just hearing their music created lush visuals in my head.  Their style is perfect for what they are going after.

Go listen for yourself at: 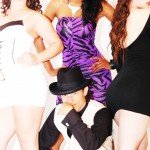 Pimp Tyt - Classic Pimp Rap Is Still Alive Previous
Stephan Nance - Awkward Piano Pop For You To Fall In... Next