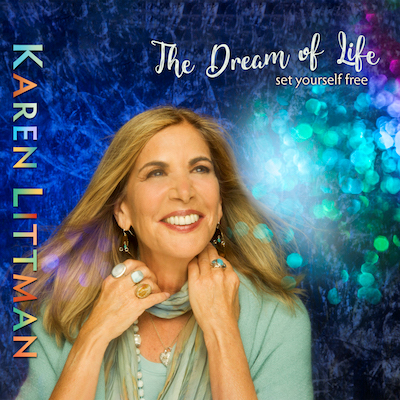 A lot of writers and performers turning their attentions to material with an ultimately positive, life-affirming message like Karen Littman‘s songs are apt to botch the execution. Instead of turning out songs that end up heavy handed or unduly saccharine, Karen Littman’s songs are informed by a complex adult point of view that recognizes life’s trials but perseveres towards ultimate victory. Or at least a brighter day.

Her music is powered by an intense sense of personal identity reflected in the album title and a number of the track titles – it’s conveyed with unfettered sincerity and a generous amount of melodic excellence. The Dream of Life: Set Yourself Free features sixteen songs, definitely an ambitious effort by any standard, but there isn’t one song on the album that doesn’t strike the audience as anything less than an earnest effort to leave an impact on listeners.

She uses the acoustic guitar and piano as the guiding instruments behind a lot of her songs, but there are an assortment of tunes that utilize strings or layered synthesizer lines to create an atmospheric, near symphonic feel. Those songs are particularly effective because the songs on The Dream of Life are uniformly tailored in a focused, not a note wasted manner.

“Where Is Home?” is the album opener and an excellent example of the first type of song – it blends abbreviated and highly charged melodic lines from the piano with a smattering of nuanced electric guitar. It isn’t a hard hitting effort sonically – but it’s a song that makes its presence felt from the first and gets this album off to an impressive start. Piano remains a strong presence in the song “Lost and Found of Life”, but the aforementioned classical feel rises to the surface through lyrical violin work, but it equally invokes echoes of the country and bluegrass influences in her musical art.

“Who Am I?” is much different than the earlier songs and certainly more self-conscious. It never fails however and shows her talents for taking a varying direction from the path her first tracks establish. Some will dislike how post production effects alter her voice, but others will surely find it to be more evocative.   It’s one of the briefest numbers on the album, but “Perfection is Not My Friend” has a profound effect on listeners thanks to its improbably giddy tenor and the deliciously mischievous vocal that Littman gives the song. It’s one of the album’s better lyrics and her treatment, musically and vocally, only makes it more memorable.

There’s a ghostly ambiance surrounding “Becoming Visible” that puts out just the right amount of atmospherics while still keeping a firm shape as a song. The power and beauty working together in Littman’s voice is rarely more apparent than it is on the song “Faraway Places” and the musical creativity that this song, full of synths, acoustic guitars, and delicate piano, defining this song makes it one of the album’s best moments.

“The Dream of Life” is a grand climatic moment for the release and Littman’s clear desire to amp things up as much as possible with this number pays off in a big way for her. Her vocal presence is never quite as in command as it is here. The title song is the album’s true exclamation point and makes this one of the year’s most emphatic personal statements.

Dream Of Life is available on CD BABY 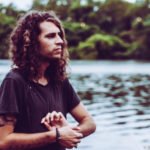 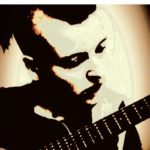