Sarah Parker Takes Us Over The “Strawberry Moon” Going back to the earliest days of a young America, music has played a key role in our day to day life. Country music itself is a lot like our official genre, and those who undertake its sterling mantle accept a lot of responsibility in doing so. Sarah Parker is a singer/songwriter looking to storm Nashville’s gates on the strength of her debut album Strawberry Moon. This medium is as important as any other staple in our country’s foundation, and she demonstrates as much in the fourteen songs she shares with us in her very first LP.

If you were to flip over this CD and have a look at the track listing, which features songs with titles ranging from “29 South” to “Straight from the Bottle,” “Lost Highway” and “Gypsy Rose,” it wouldn’t be hard to deduce exactly what you’ll be getting out of your own virgin Sarah Parker experience. With that said though, you haven’t fully appreciated Americana through the lens of modern conceptualism until you’ve heard this music at full volume. Not only does Strawberry Moon exceed the Nashville standard of new, manages to lay down some inventively stylized new sounds that could shake up the scene as we know it.

It could be the groaning keys that mar “Rose Hill” with antipathy and grievances. Maybe it’s the howl of the harp in “Keep on Movin’ (The Train Song)” or even the cathartic breeziness of “Sugartown.” Could even be the bristle of “I Got the Wander,” the wonderment of the title track or the heartfelt relatability of “Road to Your Discovery.”

Whatever it is that makes Strawberry Moon such an addictive treat to hardcore country buffs like me, you’re not likely to decipher it, as Parker layers enough piercing poetry, lighthearted string play and decadent vocals to keep you hypnotized for a great deal of time after first acquiring this album. The great enigma of this record isn’t in its lyrics, but in its inexplicably captivating, progressive tone, that seems to follow us from the second we press play until we finish up “Straight from the Bottle.”

Every one of these songs has its own personality that seems conflicting with the track sitting beside it, and yet the fluidity of this LP is strikingly smooth and evenly paced. Coming in at just under one hour, Strawberry Moon is far and away not one of the longer albums that I’ve written about lately, but it is easily one of the weightiest, at least in terms of content. She’s got plenty of room to grow and iron out some of her minor imperfections (all of which, I would like to point out, are cosmetic in nature and have absolutely zero to do with her actual execution or approach to songwriting), even with the streamlined capacities of this album considered, though I will add that you’re not likely to come across a more exceptionally well-rounded debut album this winter. She’s doing great things with very little at her disposal right now, which tells me that she’ll do even more impactful work as time goes by and her career inevitably grabs its share of the spotlight.

Find the record by Sarah Parker on iTUNES. 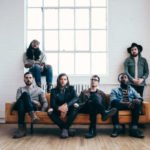