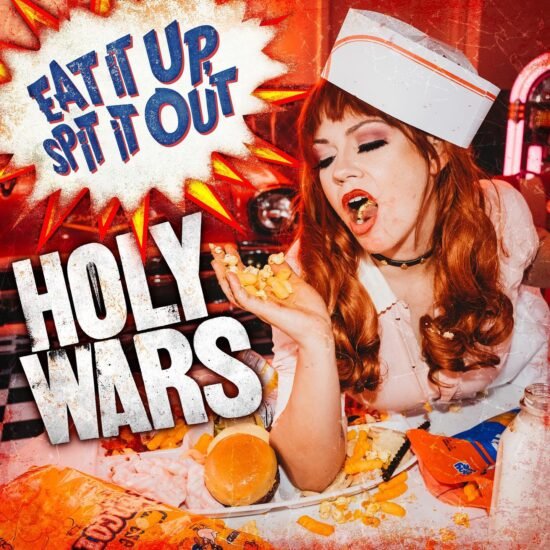 Describing the band Holy Wars is not a simple task. At first, they come across as just a rock band, but they are so much more than that. Since the early days of their debut EP ‘Mother Father‘, they showcased an impressive and thought-provoking lyrical depth that pulls no punches. Kat Leon (vocalist/songwriter) and Nicolas Perez (guitarist/producer) weave an impactful sound with honest lyrics that have received well deserved praise. Not only that, but the vocal presence of Leon ensures that her delivery is as memorable as everything else. They have created many outstanding tracks, including “Mother Father”, “I Can’t Feel a Thing”, “Born Dark”, and “Welcome to My Hell”. As well as their songs, their videos are equally as impressive with their visual feast to accompany their soundtrack.

With momentum on their side, Holy Wars are now ready to release their debut album ‘Eat It Up, Spit It Out‘. It is a collection of songs they say “represents the different sides of our shrink-wrapped, ready in 5 minutes, Fisher-Price, gluttonous, A.D.D, quantity vs quality junk food social media society we live in then and now”. They continue by saying, “The tones and imagery of this album are abstract with a fusion of futuristic dystopia and a reminiscent past setting in the 1950s where we were sold this Norman Rockwell fantasy of an American Dream”. From their previous tracks and what they have described, this release will be a force of nature that is not holding back.

The Holy Wars welcome the listener with a sound byte called “Welcome to the Shit Show”, and they hope you, “Stay awhile, won’t you?”. After it, they turn the volume up for the outstanding “21st Century Bitch”. It low-key opens up to support the lines, “She’s evil she’s so sick / She’s a 21st version century bitch / Spinning my head and she’s turning tricks / I take another hit of the pistol whip”. It deceptively moves along before it explodes into life with its hook. Its delivery is infectious and sticks in your head. It’s hard not to sing along, especially with the lines, “Flip the switch, take a hit / Yeah I’m losing count / Cut it up need a fix / Cuz I’m running out / Of lives in her grip / 21st-century bitch”. From beginning to the end, it is an impactful track that grabs people’s attention.

With a little less swagger, “1% Milk” is an anthem about the imbalance of the rat race. But it will make you want “to raise a glass for yourself and your broke ass friends”. A track that also highlights the depth of their songwriting. A trait that stands out even more with “Little Godz” as it talks about the obsession with social media influence. From its outset, the lyrics flow and the guitars demand attention. If that doesn’t, then their hook with, “Little Godz / Who’s the supreme? Dirty deeds / Get down on your knees like a dog / Think you’re born to be a God” certainly will. They highlight how these ‘Little Godz’ are too much as they make you wanna, “Bury my head deep into the ground, underground / They all talk too loud about themselves / all these Little Godz”.

“Battery Life” is yet another anthemic moment. It’s one to help empower people to release those who have a harmful nature towards them (both mentally and physically). A feeling reflected in the hook, “Oh, I’m used and abused / Oh, I’m judged, and accused / Oh, Cut me out on the loose / Suckin’ up my battery life”. Following on is “Intermission”, a fun and twisted mini commercial. Soon after that, The Holy Wars come back with some more rock goodness with “TV Dinner”. You gotta love the swagger to Leon’s vocals as she opens up with, “Don’t turn that dial this episode, is sponsored by your mother / While your daddy’s watching naked girlies eating TV dinners”. Underneath its attitude and killer guitars, there is more of their lyrical depth. It is a message, to not accept things the way they are, don’t be afraid to question things.

‘Eat it Up, Spit it Out’ by Holy Wars is an unforgettable force of nature, for all the right reasons

However, “Get Mine” is not all about the vocals. The arrangement and production of its soundtrack steal the spotlight. The pounding beats and the electronic elements get under your skin. You feel every second of the energy within the music. It is the kind of song that will possess a crowd when performed live. It is not a track you listen to, but you feel it. Personally, this has been on repeat. It is that good!

Doing what the title says, “Bolt to the Head” is a no-nonsense, hard-hitting track. As does “Suck It Up”. Both continue to highlight that this duo know how to make a rock song that hits hard. Confirming this album means serious business. Sandwiched between them is “Rx”, which offers another humorous interlude. As the release arrives at its finale, there is a slight change in the sound they are creating. For “Everyone is Starting”, they add some pop elements to the mix. It is a different feel to the other songs, but it still fits them well.

During the intro of “I’m Messy” the guitars ensure you pay attention. Then the vocals kick in with, “Driving fast / Full throttle to the crash / Jumping off the edge with a death wish”. Together they create a less energetic mood compared to those prior. But it still sounds great. It is a dark horse of a track. It may not stand out as much as others, but you find yourself singing along to lines such as, “I’m chasing my tail / Have you met me / Yeah I’m messy / Yeah I’m messy”. A subtle earworm that sticks with you even after it is over.

Closing off the album is another commercial type sound byte called “Thank You for Coming”. A thank you from the band for listening to ‘Eat It Up, Spit It Out‘. Holy Wars have created this collection of songs so good on so many levels. Honestly, it is one of the best rock albums you will hear this year. Just press play and let their music do the talking. 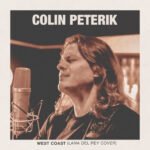 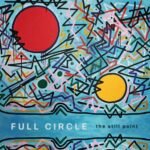