Marius Holth Takes Us Through His ‘Wild Poem’

Some individuals are just meant to be in the arts. There is an artistic gene that guides them towards creativity in entertainment. Norwegian Marius Holth has had his turn in many spaces in the entertainment field. Most recently with his full-length record Wild Poem.

Born in Trondhjem, Norway in 1971, Marius Holth grew up along the coast in Horten. As a child, he experimented with many creative expressions, made short films, theater, and had great success with a photo exhibition from a journey to India in 1993. It was clear that the arts were in his blood. When Marius discovered his dynamic singing voice, he knew he needed to share it with the world.

The latest expression is his 12-track Wild Poem album. The record delves into a wide array of musical styles to feature the versatility of Marius Holth. The elegant beauty of the opener “Gypsy Priest” blends his skills with a dramatic storytelling style reminiscent of a song off of The Wall by Pink Floyd. The switch to the mellow disco-influenced “The Candidate” turns the tide to a high energy intensity with a meaning hidden in the lyrics.

The pretty piano of “Imaginary Queen” creates a soundtrack style open to let Marius Holth showcase his emotive vocals. We feel as he does as the song builds to cresendo. “Falcon” continues this emotion fueled sound with the listener taking time to focus on where the singer is taking us in the story.

The single “A Voice From Within” has already built up a sizable stream count throughout the world. It is a beautiful rock-inspired ballad that lets the piano drive the energy while Marius takes us on a lyrical journey.

Keep up with more from Marius Holth on his WEBSITE. 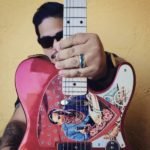 Marius Holth Takes Us Through His ‘Wild Poem’