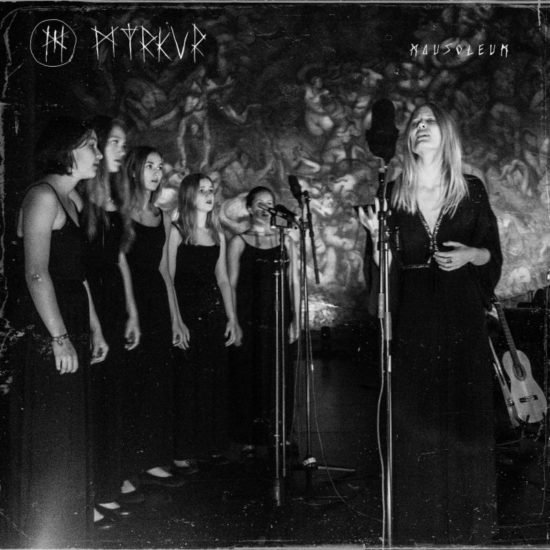 In the reverberating acoustics of the Emanuel Vigeland Mausoleum in Oslo, Norway, MYRKUR casts a spell with melodic patterns and Gregorian chanting like a church sermon. With pure vocals evoking a riveting elegance, “Vølvens Spådom” unleashes this world in MYRKUR’s new creation, Mausoleum.

A thickness of vocals and harmonies creates a circle above the ominousness from the under-chords of the piano in “Jeg er Guden, I er Tjenerne.” Minor chords strike like a clock denoting the oppressiveness of time, a suffocation of space.

Still the vocals have an incredibly saccharine sound, a several-part harmony gathering like a group of women conducting a séance. When the swirling vocals of the Norwegian Girls Choir create a canon with MYRKUR’s lead vocals towards the end, this repetition of sound echoes this sentiment.

“Skøgen Skulle Dø” springs open with acoustic vocals bouncing in a bellowing tone off of the hollowness of the Mausoleum walls — sounding like a cave of crystals, deep and dark.

As the guitar plays a lullaby melody, or a renaissance ballroom winding, the piano chimes in with a looming sense of haunting, churning notes in a twisted resonance. But the angelic ghostly vocals paired over create a dramatic outpour of emotion, teetering on the edge of fear and delight.

With soft and whispered vocals, MYRKUR sings like a prayer in “Byssan Lull” — a solo, solitary performance. Then, when the Norwegian Girls Choir joins in they add fullness to the wails, the intimate calls, and the chords of the piano strike down like lightning. But even when the notes brighten, they still linger in a fearful curiosity.

The medieval melody of the lyre-like guitar is conflictingly uplifting over the eerily chilling piano in “Den Lille Piges Død,” which roughly translates to “the little girl’s death.”

The brightness of the guitar holds the happiness of the piece, the innocence, while the piano shatters this peaceful feeling with alerting tones. Then the vocals stream out, and they are the voice of a mountain, a spirit sound — a winter wind circling the peak.

“Frosne Vind” is a short breath of sound, a step-by-step dance with the medieval guitar playing a carol sound. On the flip, “Onde Børn” is a battle of this carol guitar intensifying in crescendos over the piano’s distraught wallows and the vocals striving on this up-slide of wonderment.

Again, a soliloquy, a prayer, in “Song To Hall Up High” MYRKUR climbs through the scale in an outcry of higher decibels with a perfectly timed stillness in her vibrato. MYRKUR sings, “My time has come to die,” with an absence of fear and sorrow but a contemplative contentment, which parallels the acceptance of the song.

Colliding vocals merge in a wave of gooseflesh harmonies in “Dybt I Skoven” — an ocean stirring in the onset of the outbreak of a storm. The vocals float on top of one another in a beautiful synchronicity, pulsing together like a body, breathing, beating.

The last minute of “Debt I Skoven” is a thunderstorm of clapping, crescendoing against the cave-like walls in an uproar and closing the Mausoleum door on this eclectic experience. 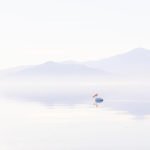 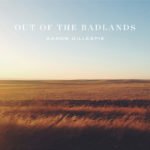 L’Homme Absurde is a Collision of all Metal Genres