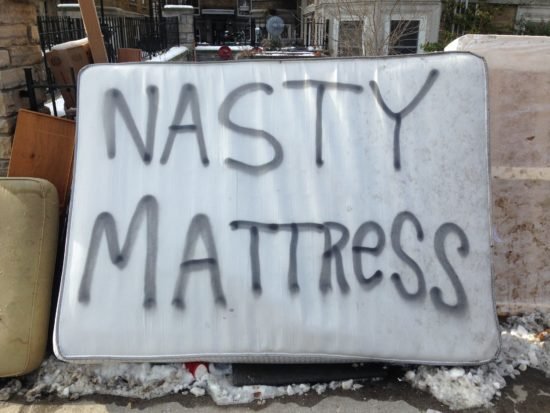 I was running a small contemporary art gallery in Toronto’s Parkdale area, also referred to as “Sparkdale” in the parlance of Toronto-centricity.  It can be described as a historical and colorful west end neighborhood with tree-lined streets and offering a vibrant nightlife.  It is characters such as Michael Dent, one-half of the experimental raunch-wave outfit “Nasty Mattress”, who are the authentic, waning DNA of such an enclave.

I first met Michael Dent in my once art gallery (gallerywest) – he was blunt, crude and looking to show his street photography in my space.  I REALLY DISLIKED Michael Dent on our first encounter, circa 2010.  Fast-forward a year later we found some commonalities and ultimately became pals.  His first-wave Toronto punk history coupled with a “don’t give a fuck” attitude within a genuine Parkdalian heartbeat eradicated my attempt to present a polished professional art gallery guise, and he soon became a living fixture in the gallery, providing a DIY – in-your-face high energy contrary to the polite didactic dogma of professional gallery culture.  Michael Dent is the most offensive, foul-mouthed, gold-hearted, stale DAB tallboy you will ever have your picture taken by.  He loves to take your picture, or any picture he wants with zero permission granted –not one fuck given.

Dent is one of two individuals who comprise “Nasty Mattress” – an experimental musical endeavor propelled by engineer and instrumentalist, Mike Andrechuk’s studio and musical skills and Michael Dent’s talent with word-smithing resulting in an unparalleled hyper-juvenile energy.  “Nasty Mattress” also employs the talent of artist, Paisley (Strum Group, Purple Institute) to bring a visual cohesiveness to the enterprise.  The true anti-heroism of “Nasty Mattress” is the denial of all governing comportments for politeness and likeability.  I suspected that this would be the case, as Michael Dent exists exclusively in the realm of “this is my art and get bent if you don’t like it” – there is no room for compromise or versatility.  I often disdain such stubbornness and non-porous output, but it has taken my relationship with Dent and my intrigue with “Nasty Mattress” to truly appreciate such traits at its most heightened and realized ruckus.

When Nasty Mattress asked me to make a music video for one of their singles, “Sugar Daddy”, for their upcoming LP titled “Another Sniff/Another Sin” featuring album artwork by Martin Glover of legendary “Killing Joke”, I had to say yes.  I mustered all of the Toronto messiness, surrealism and humor I could access with my prairie boy sensibilities and made a video that taps into a Canadian metro-theatre of the absurd.

( Footnote:  Michael Dent first embraced punk rock and recording as the drummer and vocal contributor to Canadian punk rock legends, “The Dents” who formed in 1977 at George S. Henry Secondary School in Toronto.  In their day, they were in the mix with the likes of “The Cramps” (original line-up) and “Lydia Lunch”.  Dent is truly a Toronto experimental punk rock musician and veteran artist.) 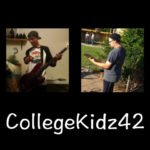 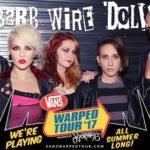